Do This When You Have a Coworker with an Abrasive Personality

HomeDo This When You Have a Coworker with an Abrasive Personality 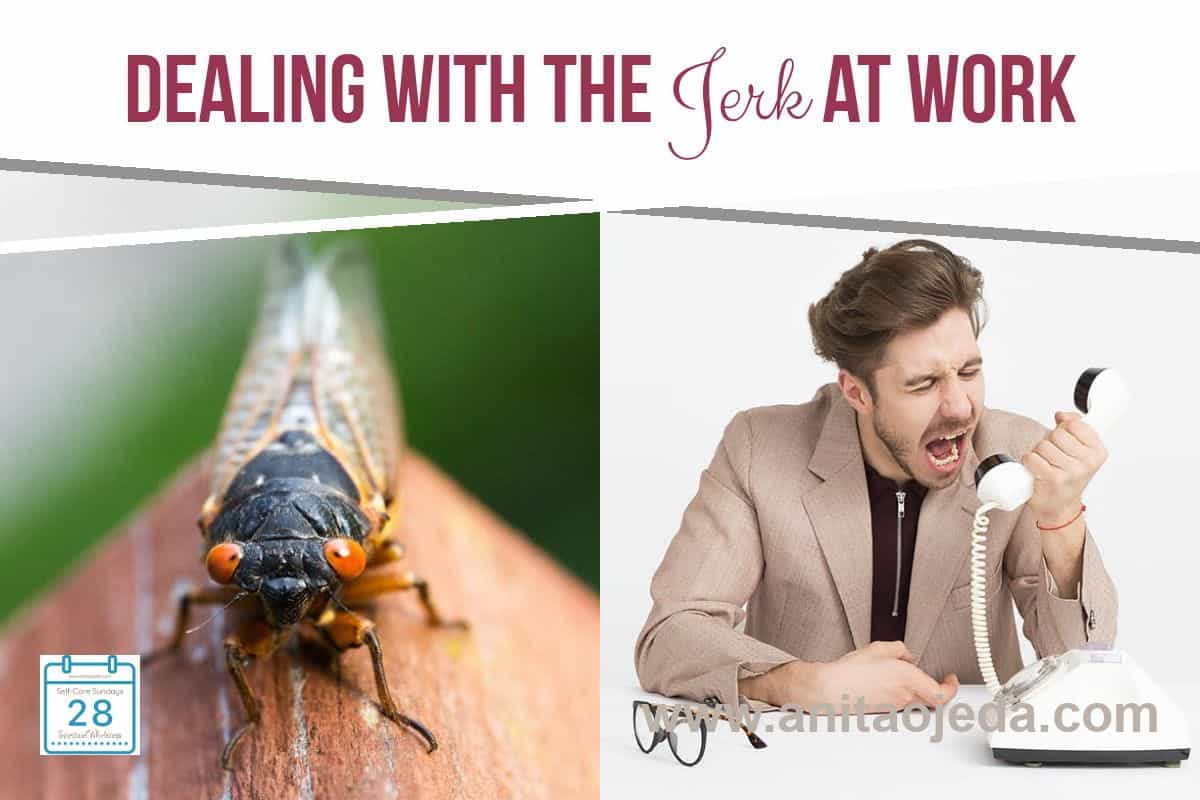 Know someone at work with an abrasive personality? That’s a polite term for a jerk at work. Maybe it’s time to stop letting the jerk get under your skin and take action!

“Ugh!” I groaned a little as I spoke with a friend towards the end of the summer. “Some days I just want to retire because I tire of having to deal with the jerk at work.”

My friend looked surprised at my outburst. “I don’t think I’ve ever heard you call someone a jerk before,” he said.

I blushed. “I don’t usually say the word out loud, but I’ve probably used it far too often in my head. I suppose a better term would be ‘a coworker who suffers from an abrasive personality.’”

“Just remember that YOU may be somebody’s ‘jerk at work,’” he cautioned.

“I know, I know,” I replied. “I can just imagine one of my coworkers sitting at home wishing that they didn’t have to start the school year working with that pushy English teacher.” In my head, I didn’t really believe what I said.

After all, I see myself as perfectly reasonable and easy to get along with. In other words, I have a healthy self-concept or high self-esteem.

According to Adam Sicinski,

Your self-concept is somewhat a collection of beliefs you have about your own nature, qualities, and behavior. It’s about how you think and evaluate yourself at any given moment in time.

In order to understand self-concept, and what it has to do with people who have an abrasive personality or the jerk at work, we need to look to Humanist Psychologist Carl Rogers. Rogers believed that a person’s self-concept consisted of three elements.

1) Self-image—the way a person perceives him or herself. I know someone who frequently yelled at and berated underlings at work. When confronted with her behavior, she first got very angry, and then broke down in tears. She couldn’t understand how people could say such mean things about her. Self-image isn’t necessarily rooted in reality. A person with an abrasive personality may see herself as kind and friendly.

3) Ideal self—who we want to become.

In other words, our self-concept has more to do with our perceptions of ourselves than reality. Who knows? Maybe my personality rasps on someone like a cicada in south Texas in the summer.

In my younger days, I made a habit of avoiding people who had an abrasive personality. I would make a snap decision when someone irritated me and write them off as just another jerk at work I would have to deal with, but remain distant from.

But James smacked me upside the head on Saturday.

Don’t speak evil against each other, dear brothers and sisters. If you criticize and judge each other, then you are criticizing and judging God’s law. But your job is to obey the law, not to judge whether it applies to you.

I get uncomfortable when God points the error of my ways in such plain English that I can’t avoid it. It interferes with my positive self-image and healthy self-concept like a zit that sprouts on my chin before an important meeting.

I realized that my whiny comment about wanting to retire came from a dark place in my mind. A place where anyone who irritates me is a jerk. And when people don’t agree with me, they irritate me. This line of reasoning had sprouted out of control like a dandelion on a lawn. And the roots ran pretty deep.

Paul has something to say about the jerk at work, too. “Forgive as quickly and completely as the Master forgave you” (Col. 3:12-14, MSG). I don’t much like that verse in the Bible, either. But we don’t get to pick and choose what parts we like.

Those verses convicted me. I knew I needed to make changes.

Pigeonholing the Jerk at Work

The problem started because I like to avoid conflict. Instead of confronting people and problems in the moment, I constructed a little closet in my mind with a billion pigeonholes.

When I encounter abrasive behavior, I assign a pigeonhole to that person. I’ve filled my brain with a closetful of all the people who irk me, tick me off, annoy me, anger me, hurt my feelings, and offend me.

Someone says something I don’t agree with during a staff meeting? I avoid talking to them for a while. A person’s behavior gets on my nerves every time I’m around them? I go out of my way to never be around them.

I don’t exactly gossip about the people who annoy me, but my actions build walls to keep people who suffer from an abrasive personality out of my life. When coworkers share their encounters with jerks, I nod my head in sympathy and add another slip of paper to the pigeonhole.

I’ve discovered that it’s easier to express love for my enemies than it is to like the jerk at work.

I stuff those offenses in my mind and I never take the time to talk it over with the person who offended me. We need to speak up in love and say, “Hey, could you help me understand where you’re coming from when you said such and such?”

I need to burn all those slips of paper. Tearing down the closet entirely and replacing it with something else sounds like a good idea, too. People shouldn’t have to work their way back into my good graces.

God forgives me immediately. He doesn’t forgive me conditionally and bit by bit as I work myself back into his good graces.

Dealing with the Jerk at Work

I have a few choices for learning to forgive the jerk at work (regardless of where their offence lies on the severity scale).

So that’s what I did during my morning run. And I’ll continue to do so throughout the school year. I’ll pray for my colleagues and I’ll pray for my interactions with them. I really do love my job. I’d hate to retire early just because I never learned to get along with other people!