Angry? How to Release Pent-Up Anger

HomeAngry? How to Release Pent-Up Anger 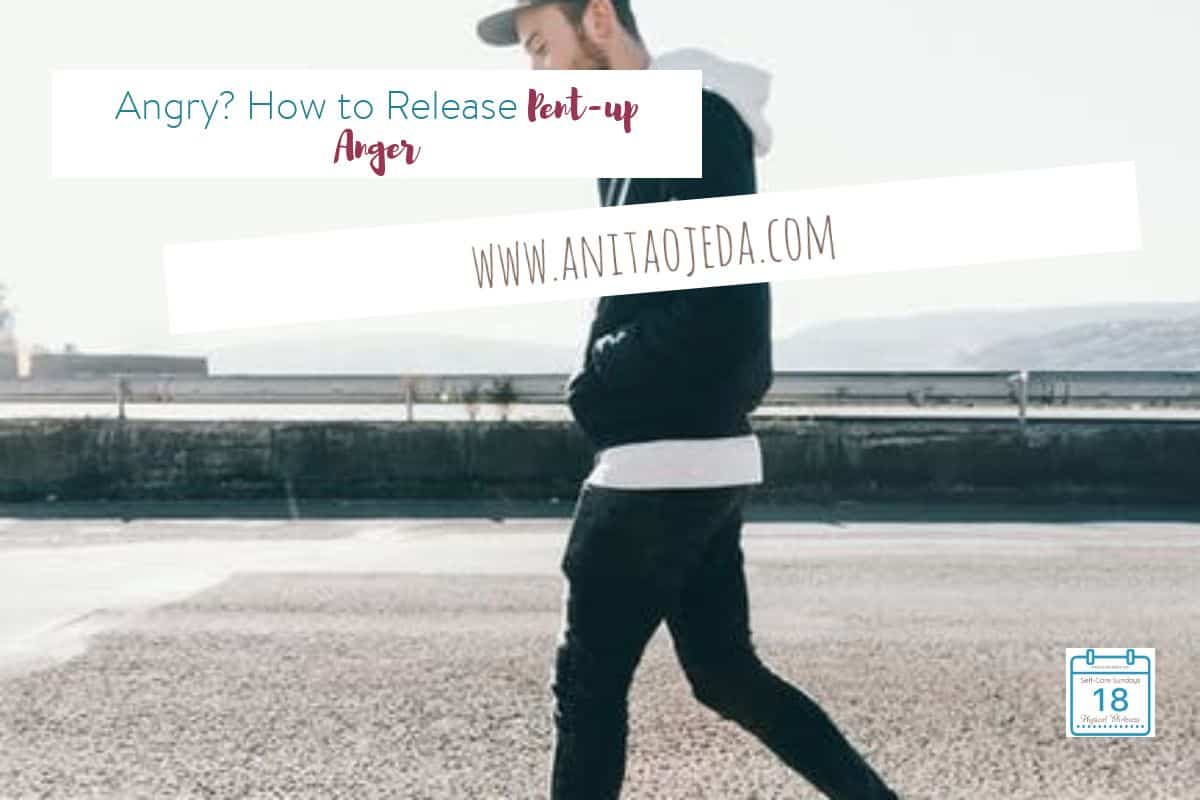 Contrary to popular belief, if you want to know how to release pent-up anger, you shouldn’t buy a punching bag. This summer I’ve learned how to handle my angry emotions in a more productive way.

“Do you want to go for a bike ride on Sunday?” Pedro asked me.

“Where and what will the weather be like?” I replied, with a grumpy snarl to my voice. I hated that he even asked me, because he had to know that I’d probably say no.

He rolled his eyes and checked his weather app. “Eighty-nine Show Low, and 92 in Flagstaff.”

“I’ll pass,” I told him, “unless we can be there by sunrise and ride before it gets hot.” He hates getting up early on weekends as much as I hate exercising in heat.

We’ve had the same conversation countless times. I feel guilty about not spending time with him. He feels frustrated that I can’t suck it up and enjoy an afternoon doing something we both love.

My intense dislike of hot weather always peaks in August. For a few blessed hours each day (usually between 3:30-6:30 a.m.) temperatures dip into the 60s. During these golden hours (although I don’t know if one could call them golden because the sun doesn’t come up until 5:45), I can enjoy the great outdoors.

I can’t always drag myself out of bed early enough to enjoy walking and running in the cooler hours, though. I’ve noticed a negative trend in my emotions pretty much every August for the past twenty years. I get angry more often. One August, a poem built up inside me and exploded all over the pages of my journal.

The death throes of summer

Long days that stretched before me with

Not much to do morphed into

choppy days with not enough time to

I yearn for cooler weather without the

Artificial hum of air conditioners and

Duty calls me back.

Danger lurks, coiled and ready to strike as I

Delighting only when infrequent

Thunderstorms dump monsoon rains on the

Dry, parched, desert (and me).

I dance wildly behind the curtain of rain,

Shaking my fist at August. Tension

Anger spent, I wander home after the

Tempest. Ready for another long

Why does August bring out the angry in me? For years, I had no idea. But a relatively new branch of psychology, Eye Movement Desensitization and Reprocessing (EMDR) may hold the answer.

Patients with PTSD (post-traumatic stress disorder), anxiety, addictions, and panic attacks have found EMDR therapy useful for helping them reprocess traumatic events or triggers while a therapist directs them to move their eyes back and forth. It sounds overly simple.

The founder of the EMDR movement, psychologist Francine Shapiro, discovered the technique when she realized that as she walked in the woods, her negative emotions abated.

This animated video explains the process and the psychology behind EMDR.

Learning about EMDR helped me realize why my emotions go haywire during August. I only practice one of my two favorite ways of processing emotions—journaling—in hot weather. In August, the weather conspires against me.

Instead of going for a long walk after school, I retreat to my air-conditioned living room. The minor annoyances of the day boil and clump together, resulting in an unidentifiable, gelatinous mass of anger and grumpy attitude.

If someone were to ask me if I was angry, I would most likely deny it. After all, I rarely have anything to get really angry about. But unresolved emotions morph into pent-up anger if we don’t work to resolve them. Kind of like clearing the cache on your computer speeds it up and helps it process everything more efficiently.

Since exercise increases endorphins, and both walking and running require us to move our eyes back and forth, they provide a happy kind of self-administered EMDR. Which explains why I get angry in August when I don’t exercise at my regular times.

How to Release Pent-Up Anger

These tips come from a variety of sources, including personal experience.

According to Dr. Susan Davis, author of Emotional Agility,

“…’showing up’ means facing into your thoughts, emotions, and behaviors willingly, with curiosity and kindness.”

Whether you write in your journal or go for a walk, you need to show up with compassion and kindness for yourself. Emotions are. We all have them, and they don’t make us ‘good’ or ‘bad.’ Start your exercise session with intent and kindness. Don’t deny your emotions, acknowledge them.

For some people (like me), listening to music, podcasts, or books takes away from the therapeutic experience of walking. I can’t hear myself think when I try to pay attention to sounds coming out of my earbuds.

Think about what’s bothering you or annoying you. Remember not to berate yourself for your pent-up anger or negative feelings.

Learn to show up to your emotions with kindness and curiosity. Emotions are. #angermanagement #anger Click To Tweet

Walk rapidly (or run), and let your eyes track from side to side. That’s how Shapiro first discovered the benefits of eye movement and reprocessing strong emotions. Let your mind process the experiences of your target problem or emotions as you walk.

Dr. David suggests asking yourself about the function of your emotions.

“What is the purpose of this emotion?”

“Is something buried beneath that emotion?”

“What is the emotion trying to tell you and what will it get you?”

6. Make room for the bigger picture.

I often walk outside in the evenings and experience spectacular sunsets. Seeing the scope of beauty transports me outside my anger and frustration and helps me see the bigger picture. Two days, or even two years from now, it won’t matter that a driver cut me off and almost made me wreck.

Maybe what you thought was anger is actually sadness in disguise, or even fear. Processing helps us sort out the mess and gives us insight into taking the next step.

Whatever You Do, DON’T Hit Something When You’re Angry!

Walking, running, hiking, or EMDR act differently than pulling out the proverbial punching bag (whether real or imagined). According to Dr. David, people use one of three strategies for dealing with anger. They bottle (push their emotions aside and try to ignore them), brood (think endlessly about the problem, obsess over an incident, and run multiple scenarios and outcomes through one’s mind), or remain overly cheerful.

Psychologist Brad Bushman did a study that proves physically lashing out at an inanimate object actually makes us angrier. Bushman wanted to design an experiment that would either prove or disprove theory. Catharsis theorists believe taking out pent-up anger on an inanimate object helps people release their anger in a constructive way.

Bushman gave study participants the same trigger—he angered them with scathing feedback on something they had written. Next, he asked one group to punch a bag while thinking about the person who had criticized them so harshly (they were to brood). He told the second group to think about improving their health as they hit the punching bag (bottlers and people who try to remain cheerful). For the third group, Bushman didn’t offer them an outlet for their anger. Instead, he had them sit quietly while he ‘fixed’ a problem with a computer.

Afterward, all participants answered questions about their level of anger on a form. ext, participants had the opportunity to blast the ‘person’ who had given them feedback with an airhorn.

Surprisingly, at the end of the exercise, the brooders—the ones who had vented their pent-up anger with punching—remained the angriest. Brooding, ruminating, and punching actually made them angrier. The least angry group consisted of those who had done nothing but sit quietly.

Conquering the Throes of August

I’ve made it halfway through this August without melting from heat or anger. As I get older, I value sorting through my emotional baggage as it shows up on the carousal of life. I learned the hard way about the soul-sucking consequences of bottling, brooding, or acting falsely cheerful (poor health, depression, weight gain).

Avoid the soul-sucking consequences of bottling or brooding about your angry emotions. #angermanagement #anger Click To Tweet

Instead of sleeping in, I get up and exercise at sunrise. If I have an overwhelming day, I make sure to go for a walk in the evening—somethings after dark. I’d rather meet a rattlesnake on the path than turn into one the next day.

I go to bed early so that getting up the next morning won’t leave me grumpy. And before I go to sleep, I spend five minutes journaling about my day with curiosity and kindness.