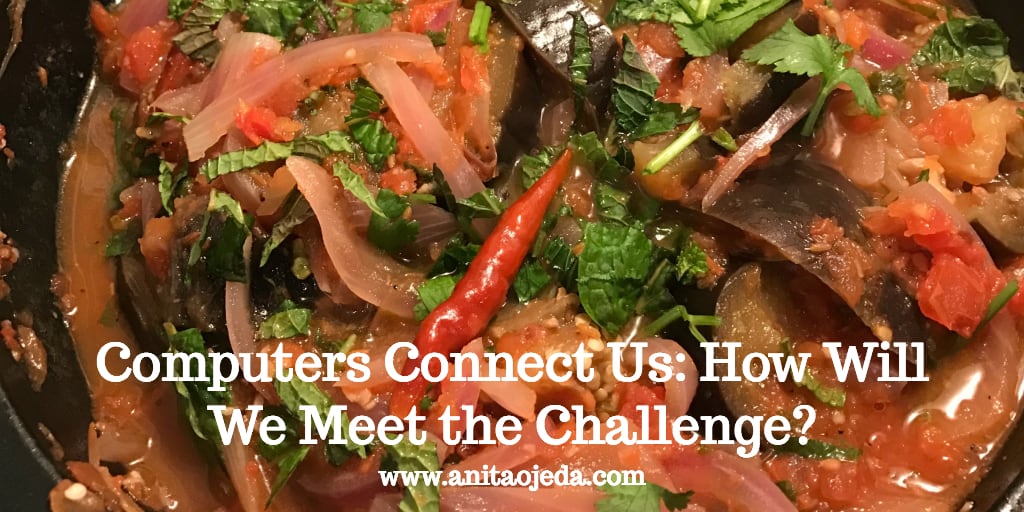 How We Connect These Days

Moments ago, Pedro finished eating his second serving of Eggplant Tagine with Mint and Cilantro over a serving of buttery couscous. I made supper using a Moroccan cooking dish that our Chinese daughter gave us for Christmas.

Pedro set down his fork and said, “It’s time to chillax. Shall we watch another episode of Poldark?”

I glanced at my watch. “I think it’s time for my Twitter party,” I said. “Can we watch it when I finish?”

He picked up his dishes and carried them to the dishwasher. “I have absolutely zero idea what a Twitter party is.”

“It’s hip to be square.” He smirked back.

The world grew smaller between when I entered it and where I sit now—at a computer, participating in a Twitter party. I entered the world before the first personal computer made its appearance. Those didn’t come along until my second year of high school. And now, the world can connect through computers they carry around in their pockets.

Yes, I’d call a smart phone a computer. My smart phone can accomplish more and has more memory than my first PC—a Mac Plus I purchased my senior year of college back in 1986.

Along with the crazy technology comes a plethora of apps that connect us even more. Over Christmas vacation, our youngest daughter introduced me to WhatsApp.

I can’t claim that I really ‘get’ it—it seems like the same thing as instant messaging via whatever program Apple uses on the iPhones. But, I installed it and used it because Sarah didn’t know if texting would work when we turned her data off when she went to Brazil.

On Christmas, Sarah arranged a live video chat with me over WhatsApp where we met her Brazilian friend, Henrique. The video only froze a time or two, and it reminded me of how difficult it had been to connect via video back when Pedro had cancer. Back then, we mostly had dial-up Internet, which frequently froze and frustrated us to no end.

And on Tuesday, Sarah and Henrique arranged for a second video chat to share the news that Henrique had asked Sarah to marry him. Their announcement didn’t surprise me. 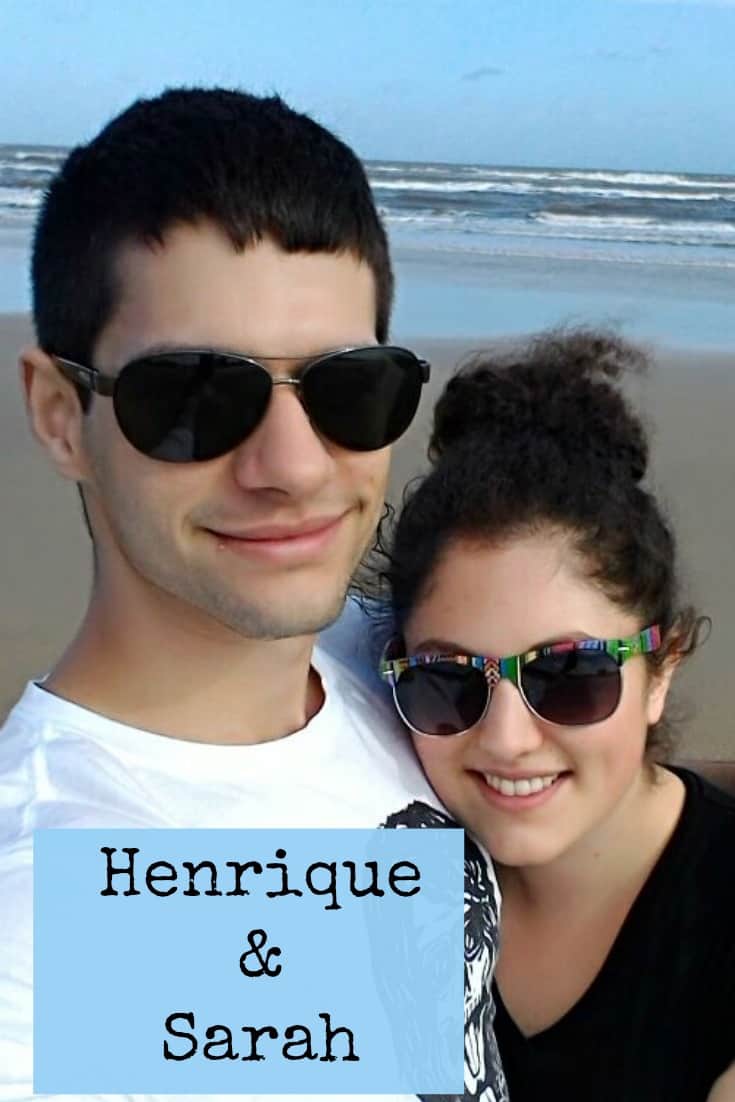 I knew they spent a lot of time hanging out on WhatsApp (a mutual Internet friend had added Sarah to a WhatsApp group about a year and a half ago). Through their online group conversations, they got better acquainted and eventually started talking directly to each other. Which lead to them calling each other via the app and even watching movies together in Portuguese.

Last year when Sarah and I did the #write31days series together about her struggle with a mental illness, Henrique friended me on Facebook. We’ve chatted a time or two on Facebook Instant messaging, too. So sometime next year, after Sarah and Henrique graduate from college, they’ll get married.

In the meantime, they will continue to connect via the Internet. Henrique plans on visiting the States in December so that the rest of the family can meet him in person. Pedro can’t wait to take him off-roading and mountain biking.

The world has certainly shrunk—and that’s a good thing in many ways. We can spread the good news of salvation in so many more ways than back in the olden days, or we can also spread hate and vitriol in the blink of an eye.

We can choose to connect by sharing what uplifts, enlightens, and promotes understanding OR we can kill each other with words. #fmfparty Click To Tweet

The possibilities to connect in good and bad ways boggle the mind. If we all do our part, we can make sure to use the gift of technology to draw us together as humans and promote understanding. I will take extra care to only retweet and like what uplifts, enlightens, and helps the world learn to get along better. Otherwise, we’ll find ourself filled with strife in sandbox. That’s my New Year’s resolution.