Creativity for People Who Think They’ve Lost it

HomeCreativity for People Who Think They’ve Lost it 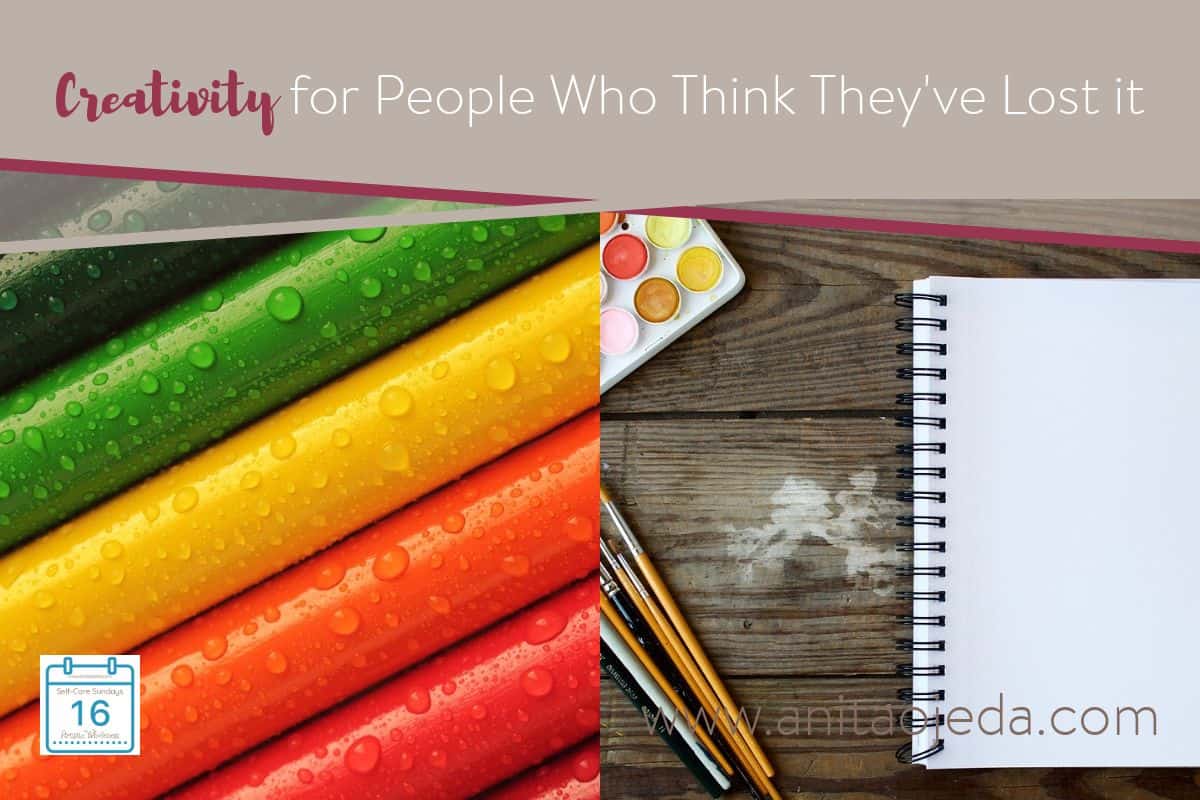 Creativity isn’t just for creative people. In fact, if you think of yourself as more academic, let me assure you that you, too, have a creative side. When you learn how to nurture your creativity, you practice healthy self-care.

“You’re so creative!” my friend informed me at the end of the senior play. I wilted to the stage in exhaustion, not feeling an iota of creativity in my tired body.

For the past six weeks, I had cut and sewn costumes in every spare minute. I’d directed rehearsals during class time and organized set building on the weekends. For two months I had taught seniors in high school all I knew about blocking, acting, line memorization, and voice projection.

I blushed a little and thanked her for her kind words as we looked at the students taking down the set and tossing costumes on the benches. Creativity and I had an uneasy relationship. I can’t draw or paint (unlike my dad and daughter), nor can I play the piano.

Directing and producing a play didn’t seem to take much creativity. After all, my students had the task of mining their creativity to make the play a success.

“I could never do something like that,” my friend’s voice broke through my musings. “I’m not creative.”

Her statement made me pause, after all, I’d spent time in her beautifully decorated house. The combinations of fabrics, textures, artwork, and furniture screamed creativity. And I knew for a fact that she had done all the interior design herself.

Some people insist that they are either right-brained or left-brained. Meaning they either have an academic, logical bent or an artistic, creative bent. I contend that since God created us in his image, we all have a little of both. Throughout our lives, we nurture one side or the other. Society might even insist that both sides can’t exist in the same person, but I beg to differ.

Maybe academic wholeness resonates with you—you love to learn for the sake of learning. Your mind loves to work out problems with logic and precision, and you see yourself as analytical. The world might throw in accompanying adjectives that give you a sense of satisfaction—steady, dependable, logical, problem-solver.

No matter which personality test I take, I end up on the logical, analytical side. When someone needs a schedule made for a complex event, they call me. No one calls me for artwork, music, or drawing.

I began to see myself as logical and analytical and thought I lacked creativity. I felt unartistic, stodgy, and a smidge dull.

I beg to differ (both for me and for you). God created you in his image, and although the first set of adjectives helps describe his nature, no one would accuse God of lacking creativity. Have you ever looked at an aardvark?

Perhaps artistic wholeness resonates with you—you love to create, whether on canvas, in the studio, or behind the lens of a camera. Your mind loves to leap and bound with delight as it creates something of beauty out of seemingly unrelated objects. You love to see yourself as artistic. The world might throw in accompanying adjectives that you a sense of satisfaction—creative, talented, artistic, quirky.

You may begin to see yourself as illogical, unreliable (after all, who has time for that when you could create something?), a poor learner, or absent-minded. I beg to differ. God created you in his image, and although the first set of adjectives helps describe his nature, no one in would accuse God of unreliability or lacking logic.

Despite what you may have grown up thinking (I know I did), scientists have debunked the either-or theory of left- or right-brained exclusivity.

Magnetic resonance imaging of 1,000 people revealed that the human brain doesn’t actually favor one side over the other. The networks on one side aren’t generally stronger than the networks on the other side.

The two hemispheres of your brain work in concert with each other, performing discrete tasks that enhance each other. It takes creativity to solve logical problems, and logic to solve creative problems.

Don’t let the world dictate who you are. Spend time nurturing the side of you that you have ignored over the years. If you relate more to your artistic side, find a free class and delve into something new and academic. You may discover that you really do love to learn—but now that the pressure of performing for grades has disappeared, learning takes on a new zest.

Don’t let the world dictate who you are. If you relate more to your academic side, take a creativity inventory—you may discover that you already enjoy artistic expression in some form. Discover what you can create. I drew a blank when thinking of artistic expression, so I invited my Facebook friends to share how they express themselves creativly. They offered a plethora of ideas—some of which I never would have thought of!

• Music—singing, playing the fiddle, piano, guitar, or some other instrument.

• Nurturing arts—parenting, gardening, work (this from my sweet friend who has a coaching business for pain management).

Over 50 people from all walks of life and career paths responded to my Facebook plea. While the number of responses and methods of inquiry would never fit the classification of a valid survey, you get the point. We all have a creative spark within us. Don’t try to put it out! Nurture that flame and learn to lose yourself in creativity.

When I look at their ideas of creativity, I realize that even though I can come up with schedules and act logically, I also enjoy many of those creative endeavors.

My friend and I both suffered from wearing blinders when it came to our inherent creativity. God wired our brains to excel at both artistic and academic pursuits. Nurturing each side is up to us!

Nurturing our creativity is one of the highest forms of self-care that we can practice. #creativity #SelfCareSunday #selfcare Click To Tweet