Do You Need to ‘Get Religion?’

HomeDo You Need to ‘Get Religion?’ 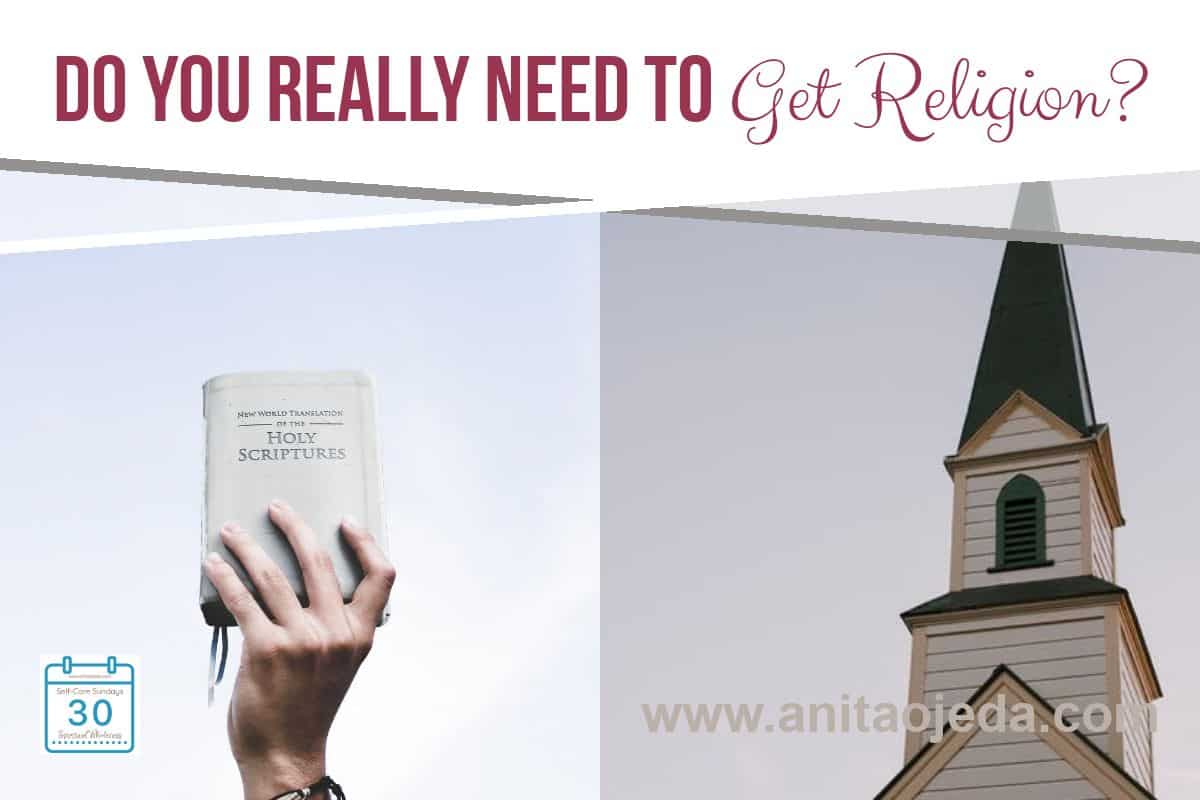 Understanding the difference between religion and spirituality allows us to understand spiritual self-care. And we all need to learn how to take care of ourselves spiritually!

“Mom, do you know what Shelly told Andrea today in school?”

“No, tell me,” I hustled around the kitchen, only paying partial attention to Laura’s after-school chatter.

“Shelly told Andrea that she’s going to hell because she eats meat.”

Her revelation stopped me in my tracks. “That’s horrible!” I turned to face Laura and noticed the worried look in her eyes. “Honey, God doesn’t care if we eat meat or not. He cares about our hearts.”

Laura’s eyes filled with relief. “So, I can tell Andrea that Shelly has it all wrong?”

“Absolutely!” I watched Laura wander off to her usual after school activities. I seethed inside. How could someone brainwash their child into thinking that meat eating would send them to hell?

Growing up in a conservative Christian household, I’d had my share of run-ins with people who equated salvation with behavior. Long ago, I had decided that I could either leave the church, or stick with it and act as a catalyst for change.

If only people could get the difference between religion and spirituality straight in their heads and hearts, the world would be a better place.

Religion has to do with a formal organization—one created by people (usually men)—to proselytize the organization. Each religion may or may not hold the Creator God as their highest power. Some religions recognize Jesus Christ, others claim Mohammad as their guide. Still others believe in Buddha or Confucius.

People form a religion when they believe in similar things and share similar experiences. As time passes and their organization becomes more formal, they codify their beliefs in order to make sure that new believers (acolytes) believe the same way they do.

Generally, the credos and beliefs of religion have nothing inherently wrong in them. Some religions claim to follow the Ten Commandments, others the writings of Mohammad, and still others the Talmud.

Think of the Spanish Inquisition, suicide bombers, and little girls who tell other little girls they’re going to hell for eating meat.

Religions appeal to those with Type-A or choleric personalities. The ones who want to know the list of dos and don’ts so they can get on with checking things off their list.

You could add things to the list based on whatever religion you grew up around.

Religion should draw a person into deeper spirituality, though, not turn them into an automaton that carries out religious beliefs.

The Important Difference between Religion and Spirituality

Don’t get me wrong. I still struggle to distinguish between religion and spirituality. My alter-ego’s name is Judgy McJudgerton. All those dos and don’ts from my childhood line up and accuse everyone who hasn’t turned out just like me.

Psychologists and researchers call this ‘consensual validation.’ Consensual validation means that we seek people who have similar likes and values to validate our own beliefs. We ‘like’ people based on their similarity to ourselves.

This need for consensual validation may explain the prevalence of religion in our lives. We seek religious communities that offer similar views to our own, and tend to judge those who don’t adhere to similar views (i.e., other religions).

Spirituality plays a different and more important role in our lives. A quick look at Webster’s Dictionary shows the first two definitions of ‘spiritual’—”of, relating to, consisting of, or affecting the spirit,” and “of or relating to sacred matters,” have nothing to do with religion.

John 9:1-41 tells the story of a man born blind who received his sight from Jesus on the Sabbath. The local religious leaders threw the healed man out of the temple. Jesus accuses them of blindness, because they saw the miracle, but refused to believe in the one who performed it.

The Pharisees clung to their religion despite the overwhelming evidence of a miracle—a classic example of spiritual blindness.

The Bible mentions spirituality in two main contexts. The “elemental spiritual forces of this world” (Colossians 2:8, 20, Galatians 4:3) have a negative influence. The “spiritual blessings” and “spiritual gifts” (Romans 15:27, 1 Cor. 1:7, 1 Cor 12:1, Ephesians 6:12) have a positive influence from the Holy Spirit through the gifting of Jesus.

According to the Bible, spirituality exists and it has great importance for our lives.

Don’t ‘Get Religion,’ Get a Relationship

Religion centers on rules, forms, and interpretation of the Bible (or other sacred writings). It won’t save us, bless us, or help us change our lives for the better. Only a relationship with God can do these things.

Religion won't save us, bless us, or help us change our lives for the better. #SelfCareSunday #spirituality #religion Click To Tweet

The Holy Spirit will help us understand the truths of the Bible and guide us in applying them to our lives. We don’t need religion for that. By forging a personal relationship with our Creator and Savior, we learn the rhythms of spiritual self-care. (You can find more information on spiritual self-care and its importance here.)

But What About Church?

Even Jesus went to church each week. God created us for community and relationship. Gathering with other believers for corporate worship and praise helps nourish us. But if the church you attend ever starts focusing more on religion than relationship, you might want to seek community elsewhere.

Either that’s a really big almond, or someone at

Female and juvenile hummingbirds need to come with

Out with the old, in with the new. Sometimes I for