When Your GPS Lets You Down

When I entered in the address for Red Eagle Lodge at the border crossing into Alaska, my excitement surged. I sat up with prairie-dog alertness, noting every landmark, road sign and tree. Finally! We had entered the home stretch!

Sarah started texting, wondering when we would arrive, and offering advice about the best place to fuel up. After driving over interminable frost heaves at a snail’s pace, my phone announced, “You have arrived at your destination.”

Pedro and I looked around in confusion. Endless forest stretched out on either side of us. No roads turned to the left or the right. “Check the phone and make sure you put in the right address,” he suggested. I did, and the phone assured me that we had arrived.

“Try entering the name instead of the address,” he said. I did, and the phone confirmed that we had reached our destination. We kept driving. I knew from conversations with Sarah that a river ran somewhere behind the lodge property and that she could see a huge mountain on clear days. Trees blocked our view of any mountains or rivers.

I texted Sarah and asked her which mile post to look for. She texted back and told me to check the Milepost, because Red Eagle Lodge had an advertisement in it. After checking, I discovered that we still had thirty miles to go.

My phone’s GPS had failed us. This had happened before, but I had never felt so disappointed. At 4:45 pm, one hundred hours after we started, we pulled into Red Eagle Lodge.

Sarah ran out to meet us and we parked the trailer near her little cabin. We toured her cabin—which took all of two minutes. Built in the early 1900s, it represented the typical cabin of its era—four walls, a roof, a window and a door. No electricity and no running water. 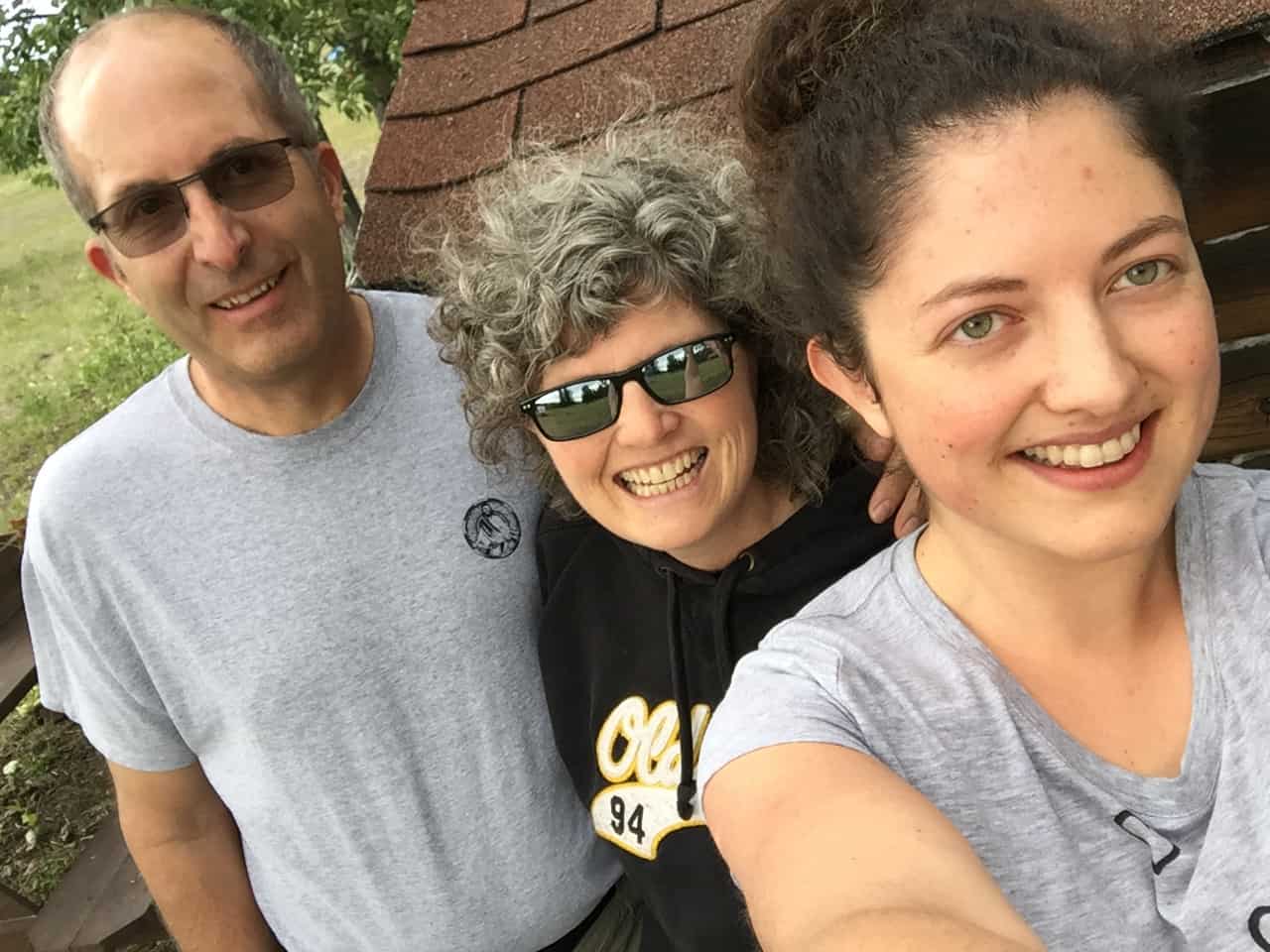 Pedro could only stand up straight in the center of the cabin. Despite its lack of luxury, her employers had made sure that the cabin looked cozy and inviting. They had even made a sign out front identifying the cabin as Sarah’s.

After the cabin tour, Sarah took us to the lodge to meet Judy and Richard Dennis—owners of Red Eagle Lodge. I had wanted to meet them in person since last summer when they offered a job and a refuge to Sarah after her very difficult year. Their faith in her and willingness to hire her earned them a special place in my heart.

Judy welcomed me with a hug and an invitation to supper—which we promptly accepted. After finalizing the parking spot for the trailer with Richard, Pedro went out to set up camp. Sarah helped me carry our laundry to the laundry room at the bathhouse.

During supper, Richard regaled us with tales of living in the Alaskan bush and Judy filled us with scrumptuous food. We felt like we had found long-lost family members. And maybe we had.

For the next three weeks, Red Eagle Lodge would serve as home base to our adventures.

I couldn’t help but compare the technology of a GPS system to the practicality of simple directions. Too often in life I rely on the Internet and what I find there instead of on real conversations with real people.

At any time in the trip I could have confirmed with Sarah the exact directions for Red Eagle Lodge. Instead, I thought I could find it myself with my hand-dandy phone app. Actually talking to her beforehand would have eliminated frustration. In my attempt to cut out the middleman, I invited a middleman in to the equation.

Q4U: Have you ever used technology that promised to make life easier and discovered that it complicated things?