Home Blog Self-care and Nurture Is Having Tea a Lost Art in the United States?
Anita Ojeda 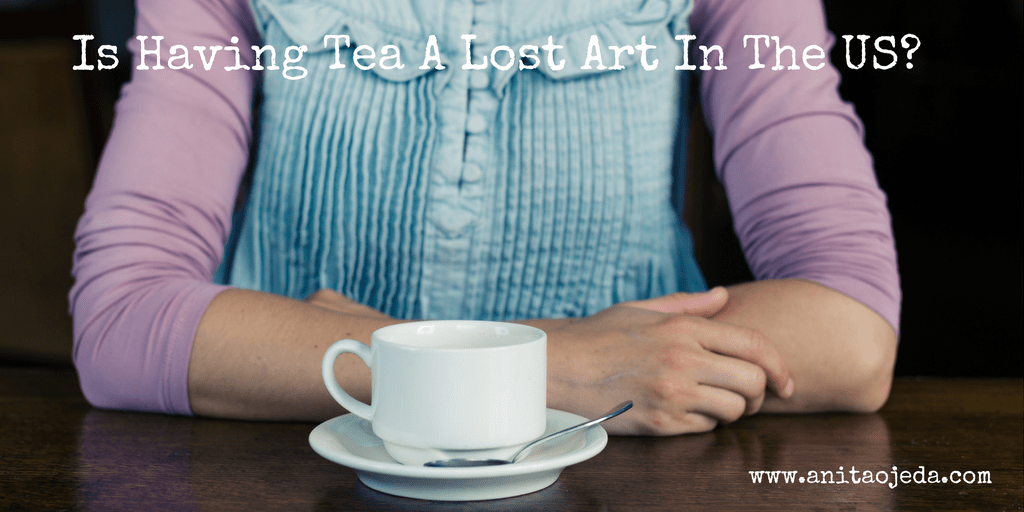 A Tea Party with the British on the Fourth of July

After our trip to Valdez and close encounter with a glacier, we decided to hang around Red Eagle Lodge for two days and join the Independence Day celebration and cookout that Richard and Judy host for all of the guests.

Sunday brought gentle rain showers and two bicyclists from England who dropped by for a hot cup of coffee. The bicyclists, Sarah and Dave, enjoyed the coffee and hospitality so much that they decided to forgo their tent and rent a cabin for the night.

We met them at a cookout on the 3rd, and learned that they were biking from Anchorage to San Diego. The next morning ended up drizzly again, so we lingered over our waffles and coffee in the lodge.

“You know what the problem with you American’s is?” Dave asked.

“You haven’t discovered the restorative power of tea.”

“I don’t think I understand,” I said.

“It’s like this, when something bad happens, you either say nothing at all or you post it on social media. Eventually, you end up either needing a psychiatrist to help you sort things out, or—”

“—you alienate all of your friends,” his wife, Sarah broke in.

“Exactly. Do you know what we do in England?”

I shook my head.

“We have a cup of tea.” Sarah answered.

“That’s right. You break up with your boyfriend and you call a friend who says, ‘Come on over, then, I’ve plugged in the tea pot.’”

Sarah chimed in, “Lose your job? Call a friend and they say, ‘Come on over for a cuppa and we’ll talk.’”

“In other words,” I said, “‘Having tea’ serves as a euphemism for ‘talking about your problems with a friend.’”

Something Restorative About Tea

I moved to the sideboard and selected a package of mint tea from the tray. The electric kettle had cooled, so I started to put my mug of water in the microwave.

“And you should NEVER, NEVER boil water for tea in the microwave,” Sarah cautioned.

Never boil water for tea in the microwave! You can't speed up #friendship, either. Click To Tweet

I burst out laughing and obediently waited for the water in the electric kettle to boil again.

A third British-born man had joined our conversation. He arrived the previous evening on a motorcycle, which he had ridden from Colorado where he now lives. “I used to work at an inner-city youth center in London,” he told us. “You’ll never guess what they did to prevent the lads from fighting each other.”

We all shook our heads.

“Whenever it looked like violence between two of the youths would break out, the counselor would invite the two to his office and offer them both a cup of tea.”

“They just sat around drinking tea?” I asked.

“Exactly. Something about the ritual of selecting tea, preparing tea and drinking it together allowed them to see each other as humans and not enemies.”

The conversation drifted in other directions, but I couldn’t rid my mind of the interchange. It stayed with me long into the evening. We sat around a campfire watching Pedro and Richard set off fireworks under an overcast but light Alaskan night sky.

I teased our British friends about celebrating Independence Day with us. They assured me that in the 246 intervening years all hard feelings had been forgotten.

What if We Drank More Tea?

As I wrote in my journal that night, I couldn’t help but wonder how our world would change if we took time to ‘drink tea’ together. We wouldn’t need to literally drink tea. What if we took the time to come alongside each other and listen more and advise less?

All too often, I find my conversations with friends over coffee contain more hurry and less listen. Our conversations tumble over each other in an attempt to say what we want to say before air kissing and moving on to our next task.

Therein lies the problem, perhaps. I have filled my life with so many to-do lists that I have forgotten the art of friendship. My life has enough problems, thank you very much, so I don’t care to listen to someone else’s.

This inability to come alongside my friends has robbed me of the gift of service. I have screened my friendships to only make time for those who I know won’t burden me with their troubles when I should be offering a cup of tea.

Beauty Tip #25: Take time for a ‘real cup of tea’ with a friend. Savor the visit and listen more than you talk.

Q4U: Do you find it easy or difficult to ‘have a cuppa’ with your friends?