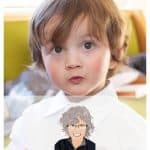 I’ll admit, having a grandson for 2.5 years probably doesn’t make me an expert in grandparenting. But I have learned a thing or two along the way.

Being a better grandparent begins with being a better parent. When your children grow up enough to get married or get pregnant (no matter what the order), it’s time for you to release them. They turn into friends and you get to forget that you ever changed their dirty diapers and used to know a whole lot more about stuff.

Your offspring (they’re adults now, so it’s time to quit referring to them as your babies) will appreciate you more if you stop trying to give them advice. Unless they ask for it, of course. They will relish relationship with you if you learn to respect their decisions. Even if the decisions they make aren’t the ones that you would make.

Once you release your offspring and see them as adult friends, you’ll discover that your relationship with them will strengthen and deepen. Keep loving them, don’t enable them, and enjoy the new phase of your relationship. When they have their own children, don’t let the new relationship fly out the window.

There’s nothing like cancer or pregnancy to bring out armchair quarterbacking from complete strangers—and parents. People with cancer (or a protruding pregnant belly) don’t want to hear your horror stories, victories, or what happened to your next-door neighbor’s Uncle Fred’s sister-in-law.

Your offspring probably won’t want a playbook of how you raised them. Remember, they experienced it already. Most likely, they already have ideas about what they think you did wrong (gasp), and what they’d like to change. Respect that. Ask questions, but don’t judge. Maintain a sense of curiosity in order to engender conversations and relationship.

It’s Their Baby and Their House Rules

Once your precious grandchild makes his or her entrance, it’s time to pull out the handcuffs and duct tape. Figuratively speaking, of course. Don’t offer your opinion on how the new parents should feed the baby, put the little one on a sleep schedule, dress the baby, or pretty much anything. Ask before picking the baby up.

Ask about sleep schedules, feeding schedules, how they want you to hold the baby, dress the baby, talk to the baby, and interact with the baby. Remember, it’s not YOUR baby. Your offspring will greatly appreciate your willingness to take the back seat and play by their playbook.

Spoil Them with Play

As your grandchild grows older, you have one ongoing responsibility that will make you a better grandparent. It works every time. Just play with your grandchild. Yep. That’s it. Our grandson has never lived closer than 800 miles from us. We don’t get to see him in person very often, although we do FaceTime weekly.

When we do spend time with him, it takes him awhile to warm up to us. I’ve discovered that getting down on his level and playing games that tickle his fancy shortens the warm-up time considerably. Two summers ago, we chased each other around on hands and knees. Last Christmas, play involved him stuffing food in my mouth (at 18 months old, this provided the best entertainment).

Last summer, we played endless hours of Suitcase (pushing spinner suitcases around, hiding behind them, and popping out to scare each other). This Christmas, since the suitcases don’t roll very well on our carpet, we invented Knockover. My backside and knees feel a little tender from getting ‘knocked over’ by my yoga ball a gazillion times while screaming dramatically. But Abel’s cackles and belly laughs make every bruise worth it.

Pedro plays Knockover, too. In addition, he’s blown a billion bubbles and plays chase. If you want to be a better grandparent, you have to forget your dignity and get down on your grandchild’s level and engage in play.

Last night, when we told Abel goodnight, we received the ultimate payoff. Instead of tilting his head towards us for a goodnight kiss on the top of his head (his default method of accepting kisses from friends and family), he ran towards us with his little face lifted. Our daughter quickly instructed us in how to respond. “He wants to kiss your face!”

And sure enough. He did. Evidently, that’s a big deal in Abel’s world. He’s more of a head kisser than a face kisser. Up to this point, only his parents have received a face kiss. I felt like I’d won a marathon.

The trick now for me is to remember my own advice. As Abel gets older, his idea of play will change. His parents’ parenting rules might change. But if I want to continue my relationship (with both Abel and his parents), I have to let them lead. I have to enter in to their world and respect their boundaries.

That’s what makes a person a better grandparent. Not how much stuff you buy your grandkids, or whether or not your offspring chooses to parent just like you did. Good grandparents build relationships that foster mutual respect.