How to Choose a Politician Instead of a Party

HomeHow to Choose a Politician Instead of a Party 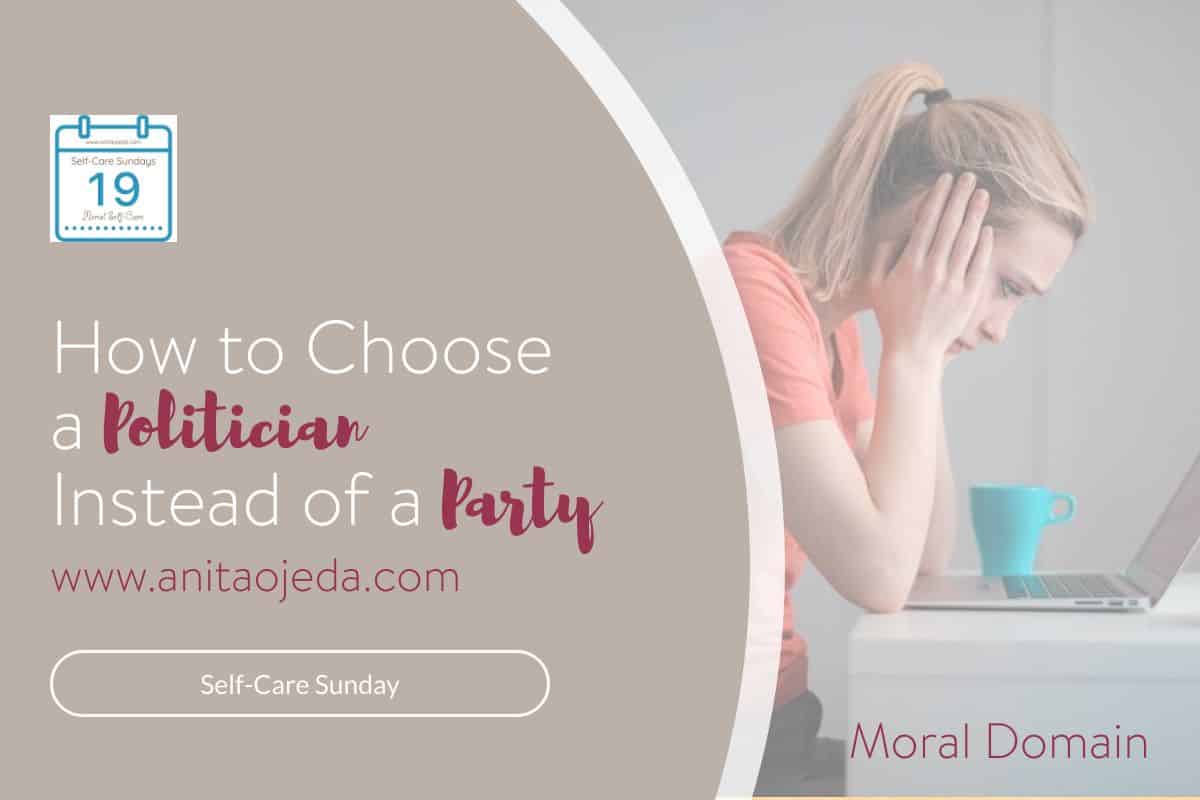 Does a person have to belong to a political party? And how exactly does one figure out the best candidate for the job? This handy, FREE Thoughtful Voter’s Guide will help you wade through the mud before the November elections roll around.

Self-care means taking care of our moral compass. As the elections in the United States start heating up the airwaves and polarizing the population, maybe it’s time to remagnetize our moral compass. When we align ourselves with Jesus, we find it easier to wade through the rhetoric and continue moving in the right direction.

Are You a Party Animal?

“What political party do you belong to, Mrs. Ojeda?” a student in my U.S. Government class asked. The 2016 presidential election loomed on the horizon, and this class of students seemed more politically aware than any group I’d had in the past.

“Does a person have to belong to a party?” I asked.

“You’re either for Hillary or for Trump,” the student insisted.

“What if I think another politician would do a better job than either one of those two choices?” I probed.

“That wastes your vote on the losing team,” another student assured me.

“But does a person have to officially belong to a political party?” I asked. “Can you vote if you don’t belong to a party?”

Students exchanged confused looks and shrugged their shoulders. They’d fallen victims to the binary thinking that spreads through our country during election year.

Finally, one student answered. “You can still vote, but your candidate probably won’t win.”

“What if I want to vote for a Democratic candidate in one race and a Republican candidate in another race?” I asked.

“Ha! I see what you’re doing,” the first student exclaimed, “you don’t want to tell us your political party so you’re confusing us with a bunch of questions!”

I laughed. “Maybe. Let’s check out what your government book has to say about the purpose and history of political parties.”

The Purpose of Political Parties

I confess I didn’t listen very well in my U.S. Government class back in high school. In fact, I didn’t understand the purpose of political parties until I started teaching government classes. Just in case you find yourself in the same boat, I’ll give you a brief refresher.

Political parties serve to put forth candidates for elected positions. The members of the parties can choose their level of participation. They can get involved in the nitty-gritty of building party platform (the group consensus on issues and ideals). Or, they can take an active role in getting out the vote by signing up new voters, going door-to-door to talk about their politician’s plans, or volunteering at campaign rallies. Some people prefer to just donate and some participate in all three activities.

Without political parties, a candidate would probably lack the funds and clout to run a successful campaign. In exchange for party support, voters expect their candidate (if elected) to listen to their concerns and vote in the same manner the voter would on each issue.

In the United States, our elected officials work for us, the citizens. We entrust them with our liberties and endow them with wisdom we hope they have.

We have high expectations for our elected officials—expecting someone to represent us perfectly sounds delusional. Instead, we resign ourselves to accepting the bad along with the good in our candidate or party. Unfortunately, this leads to ignoring the really bad when we listen to the party spin on events.

Social media makes it even easier to feel polarized. We accept the truth in 140-character sound-bites and rarely dig deeper for the whole story. The book of ultimate Truth has 738,137 words, so I don’t know why I should take 140 characters as gospel truth.

If the Bible has 738,137 words, why do we accept 140 characters as gospel truth? #2020election #politicians #socialmedia Click To Tweet

For most of my voting life, I only paid attention to politics and politicians when presidential elections rolled around. Things have changed for me now, though. I work with students who feel they have no agency.

If I want them to believe in the power of their votes, I have to model involvement in the political process.

For the U.S. Government final this year, I had students research a problem they thought a politician could solve and write a letter to the politician. They had to decide if they should address their concern to a local, state, tribal, or national politician.

Some of their letters broke my heart. While I thought they would address issues like horrible road conditions, mining in the Grand Canyon, or Bears Ears National Monument, students surprised me.

A few of them wrote about the tragedies of their reality. Of having a relative belong to the group of missing or murdered indigenous women and girls. Or having a parent deported and a family of eight U.S. citizens left to fend for themselves without money, resources, or education.

I hope the politicians they wrote to actually read their letters and listen. We have a lot to learn from people who don’t share our background or socioeconomic status.

I used to think Christians needed to stay out of politics and avoid political parties. But now I understand that we can participate in the process without joining a party. Our involvement might look different, since our ‘party leader’ will never run for political office, though.

Participating in politics means we have to go beyond the sound-bites, tweets, and Instagram stories. We need to stop reading only one side of each issue, fact-check on our own, and pray for the Holy Spirit to lead and guide us in our research.

You can download a FREE Thoughtful Voter’s Guide to Political Candidates and print it out multiple times in order to help you understand politicians, their rhetoric, and their records.

In order to vote thoughtfully, you first of all need to know yourself. What core values do you embrace? Take time to visit this Psychology Today post and assess your top 3-5 core values. You don’t have to actually practice all of these values, but your top ones should consist of your aspirational values, too.

Using your list of core values, jot down what you see as the big issues that politicians should work on for the next 2-4 years.

Don’t worry about your candidate’s political party. Even if you belong to a different party, you may discover a candidate from a different party has more alignment with your core values. Before diving into your research, make sure you understand the importance to you of the office the candidate hopes to gain. For example, where do you think your support can make the most difference—a national level, state level, county level, or local level. Triage your efforts to choose the best candidates.

Use the core values list as a starting point. You’ll need to do some research to determine if a candidate uses a core value as a coverup (empty rhetoric), or as the logical result of her or his actual core values. Remember that core values can be positive OR negative.

Remember to carefully assess the candidate’s stated core values. For example, if a candidate claims to be “anti-abortion,” take the time to determine if this stance is political (just to get votes from like-minded voters) or a true core value. Do the candidate’s personal choices, voting records, and treatment of other ‘least of these’ people groups line up with the ‘anti-abortion’ stance?

For example, can one really claim to care about the unborn if she or he does nothing to help the recently born? Incarcerating innocent children in cages along the border makes a stronger point about a politician’s value for the sanctity of life than standing on a soapbox and stating that she or he will do everything possible to overturn Roe v. Wade. Remember, candidates will say what the pollsters tell them will garner votes. What they say doesn’t necessarily line up with what they do or believe personally.

4. Compare your values to the candidate’s values.

Do the candidate’s actions in both public and private bear the kind of fruit you want others to know YOU by? Psychologically, we hate to make wrong choices and will actually defend our poor choices (or the poor choices made by the politicians we voted for). This entertaining and informative article by Scott Berkun helps explain our flawed human natures.

If you’re a person of faith, don’t forget to ask the Holy Spirit to guide you as you research and thoughtfully consider which politicians you will vote for.

For me, integrity of character really matters. But I also find it easy to believe sound bites, tweets, and other people’s Facebook posts rather than doing my own research.

Cutting through campaign clutter and digging for the truth takes times and dedication to doing a job well. But if all of us take the time to vote from a place of thoughtfulness rather than impulse, just imagine how our country could change for the better.

Next week, I’ll share tips for doing your political homework.