How to Handle Someone Else’s Negative Emotions 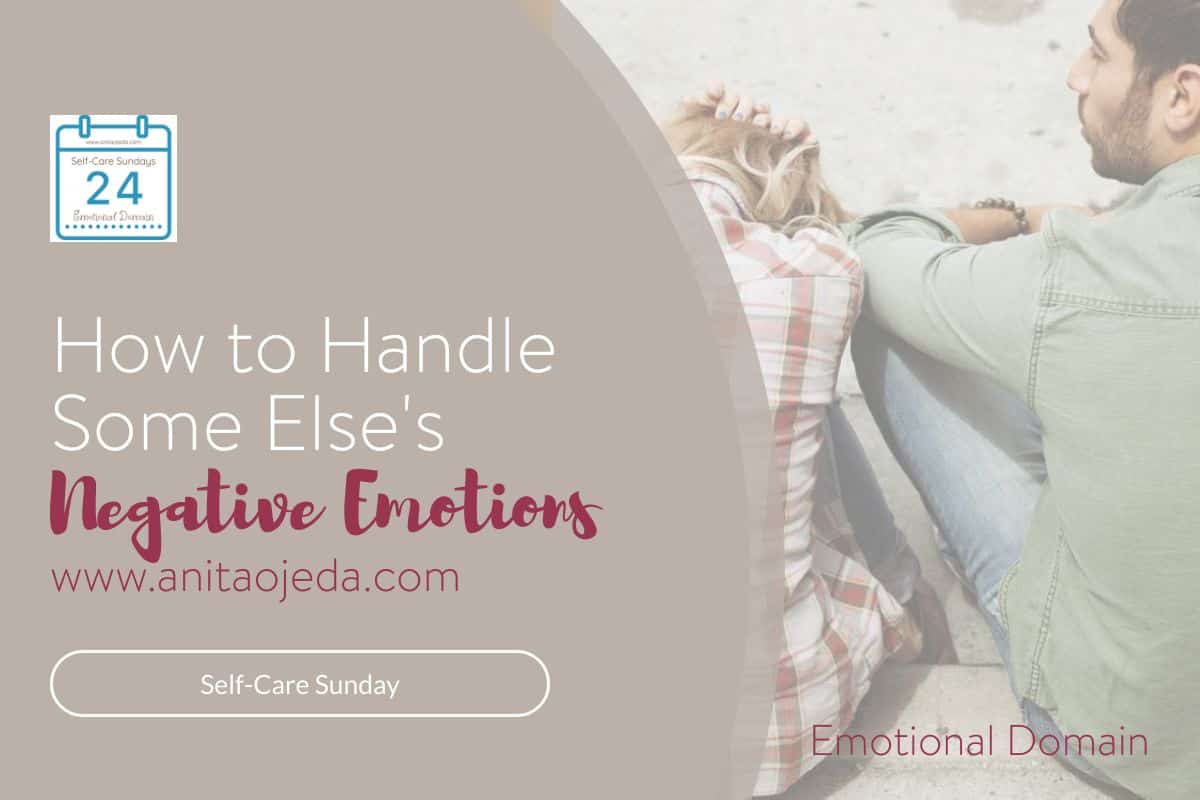 Check out these hacks for handling someone else’s negative emotions. What do you do when someone dumps their out-of-control emotions all over you? My first reaction is to feel guilt.

We all have areas, or domains, in our life that could use improvement. But knowing we need to improve and actually improving requires that we learn to set goals. The first domain we explored this year had to do with relational goals. This month we’ll address emotional goals. Don’t worry, this series won’t exhort you to act all touchy-feely and woo-woo. You may have grown up in a family of origin where no one talked about emotions or labeled some emotions as negative or positive. This month’s series will help you learn how to set emotional growth goals to help you improve both your mental health your relationships.

“I don’t know what the F*%# you think you’re doing,” my colleague yelled at me, her anger pulsating through our tiny office.

I took a step back, and she advanced, boxing me between the desk and the filing cabinet. She lifted a finger and came within inches of my chest as she continued.

“What makes you think you have the right to come in here and decide what ESL teacher gets paired with which classroom teacher? Who gave you the right to decide which students receive services?”

I peeled my tongue from the top of my mouth and tried to formulate a coherent sentence. “The principal hired me to lead out in the ESL department and make sure that all of the students who need services receive them,” I said in my calmest voice.

“Well, she can’t do that. She can’t put you in charge of veteran teachers like me who have been teaching here longer than you have.” She sniffed with disdain and pivoted towards the doorway. “I’ll be talking to my union rep,” she said as she stomped through the doorway and slammed the office door behind her.

Only then did I realize that the other ESL teacher had witnessed the entire scene. My mortification doubled. If the earth opened up and swallowed me, it would provide a welcome diversion.

My mouth hung agape and I turned back to the filing cabinet to resume my assessment of the student’s ESL files.

“It’s not really about you,” the other ESL teacher said in a kindly tone.

“Thanks,” I mumbled, trying to mask my tears by busily looking at files with blind eyes.

I’ve said it more than once—emotions are. We don’t need to label them as ‘positive’ or ‘negative,’ because that brings on self-guilt. Other people’s emotions don’t need to drag us down. Sometimes, people don’t even understand the affect their emotions have on others.

I don’t know about you, but I struggle with feelings of guilt. The words, “I need to talk to you,” can strike terror in my heart and send my mind spinning through every possible scenario. Did I offend someone? Maybe I did something wrong. Will I lose my job? Has the person heard something bad about me?

Notice that all of my questions revolve around me and what I may have done wrong. When someone tells me, “I’m angry with you,” or even worse, just acts angry around me, I get defensive. Maybe you can relate.

Perhaps your spouse comes home from work and feels angry about something that happened. He tells you about his day, and you start to feel guilty because he feels angry (I know, it makes no sense, but it happens). You jump in with all sorts of advice on how he can fix the problem at work. Before you know it, both of you feel misunderstood and grumpy.

You Are Not Responsible for Your Emotions (or Anyone Else’s)

Read that again. God hard-wired us with emotions. As humans, we all share common emotions and they often get triggered the same way. We also have free will and a responsibility to act on our emotions in a responsible manner (link to getting in touch with your emotions).

The next time you feel yourself responding to someone else’s emotions—especially the ones that make you feel guilty—try doing these five things.

Instead of seeing the other person’s emotions as a problem you need to solve, take the advice of Nick Wignall, a licensed psychologist, and author. He suggests seeing other people’s difficult emotions as a puzzle, not a problem.

Don’t jump in and try to fix other people’s difficult emotions. It won’t work and it will leave both of you frustrated.

Instead, think about what the person may want but feel unable to express. Most people won’t come out and express their emotional needs by saying, “I feel really angry right now and I just want your sympathy.”

I’ve started asking family members if they want me to listen or if they want advice rather than to just jump in with unsought-after advice. I learn so much more when I remain curious.

2. Act as a Reflector

When running in the evening or early morning, I always wear a reflective vest. I want people to see me. Their headlights will hit the reflectors and shine back at them, alerting them to my presence.

When someone unloads their emotions on you, start listening for reflection points. Try to identify their primary emotions. When they stop talking, reflect what you observed back to them.

For example, your teenager comes home from school and starts grousing. “I got in trouble today because during my history test Cindy kept looking at my paper. Mr. Hockley accused both of us of cheating and tore up our tests in front of the class!”

You feel angry that your teen received a public reprimand. Avoid your first impulse. Don’t go all helicopter on your child and call the school to berate Mr. Hockley for his behavior.

Or perhaps you get angry at your teen for sitting next to a cheater.

Either way, don’t act on those impulses. Instead, reflect back to your teen by saying, “It sounds like you had an upsetting history class today. You feel angry that someone tried to cheat and you got punished for it.”

Maybe your teen actually solved the problem on her own, and started her story in a dramatic way because she loves to tell good stories. Perhaps she knows the torn-up quiz won’t matter in the long run because Mr. Hockley drops the lowest grade. Maybe she just wants some empathy from her mom and once she feels better, she’ll ask your advice.

Using reflection validates the other person’s feelings and makes them feel heard.

For years, I thought Pedro got angry at me and I could never figure out why. I usually felt this way when we started discussing a hot-potato topic and his voice would get louder and he would speak rapidly. My defensive mechanism would kick in, and I’d get angry about things where I had no skin in the game—like the price of tea in China. Finally, I asked him point-blank, “Are you angry at me?”

“Well, you sound angry,” I replied.

“Oh. I’m just Cuban,” he explained, “we get loud and emphatic sometimes, but it doesn’t mean we’re angry.”

Other people’s strong emotions can up our levels of anxiety, causing us to raise our voice (in volume or pitch). This, in turns, acts like lighting a match and the situation can easily spiral out of control.

If we make a practice of reflecting other people’s emotions, we’ll concentrate on their words, not our own emotions. This makes it easier to keep calm.

During the heat of the moment (someone has dumped on you and you find yourself responding in kind), avoid absolutes. Don’t say, “You always get annoyed when I bring up this topic.” Or “Why do you always slam the door when you’re angry?”

The word ‘always’ acts like a red flag waving in front of a bull. It puts the other person on the defensive, which only increases their difficult emotions.

Instead, suggests Psychology Today, address the behavior at the moment. “You seem annoyed that I’m talking about this subject.” Or “Please don’t slam the door.”

By leaving off the absolute, we can make an observation or request without escalating the situation.

I have discovered that launching a quick prayer heavenward for the Holy Spirit to help me understand the other person helps me keep my temper.

When I filter situations through my own vision, I misinterpret, misunderstand, and mistake other people’s actions and meanings. When the Holy Spirit acts as my filter, I do a better job at remaining calm. This helps me keep my actions under control instead of acting like gasoline on a spark.

Check out these five hacks for how to respond when someone loses their cool around you. #emotionalhealth #selfcarehacks #emotions Click To Tweet

It’s Not Really About You

I’ve never forgotten the incident with my cursing colleague. Not because it was the first time anyone cursed me, but because of what my other colleague told me. “It’s not really about you.”

Once we’d cleared the air between the three of us and the principal (who apologized for not telling the other ESL staff what she’d asked me to do), we worked well together for the next two years.

I discovered that my angry colleague had a lot going on her life. For a whippersnapper like me to come in and try to change things must have felt like a huge insult to a veteran teacher nearing retirement.

Remember, if you get curious, act as a reflector, stay calm, avoid abosolutes, and pray, you’ll have an easier time dealing with other people’s negative emotions.

These suggestions work for run-of-the mill out-of-control emotions. If you feel threatened or in danger, seek help immediately.