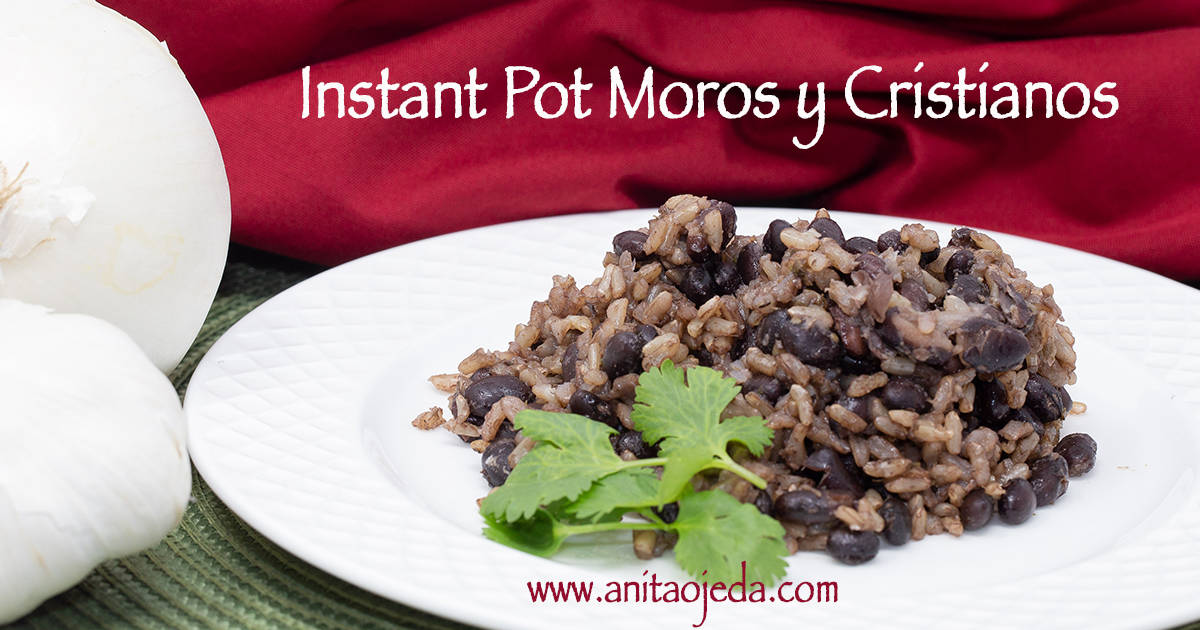 Some call it ‘congri rice’ others call it ‘moros y cristianos.’ Whatever the case, this easy Instant Pot recipe for Cuban black beans and rice tastes great!

Pedro lived in Cuba until shortly after his third birthday. His dad had to work for two years in Castro’s sugarcane fields in order to acquire visas for the family’s exit. From there they went to Spain, and then on to Jamaica, Costa Rica, Puerto Rico, and finally the United States in the early 80s.

When we met in college, his mom prepared this dish for my first meal at their house. I’ve heard it called ‘moros y cristianos’—which sounds a little racist. The beans are black and the rice looks white when it’s cooked.

But rather than filter the phrase through our politically correct lenses of today, we should look at the historical context. The phrase ‘Moors and Christians’ reflects reality in Spain in the 15th century when the Spaniards (white Christians) ousted the Moors (darker-skinned Muslims) out of the Iberian Peninsula.

This event (driving the Moors out of Spain) happened in January of 1492, about eight months before Columbus landed in the New World. The new trade routes established between Europe and the New World opened up a storehouse of new foods—including black beans.

Rice, a staple in Europe from 8th century, couldn’t have met black beans until sometime after Columbus arrived. No one knows who came up with the idea of cooking rice and beans together (Cubans also serve arroz y frijoles—rice and beans, but it’s not the same dish).

Some claim that the term ‘congri’ is what you call it when you cook kidney beans with the rice, and ‘moros y cristianos’ is the term for black beans and rice. Either way, this Cuban black beans and rice dish is good for you (especially if you use brown rice instead of white rice).

Black beans have lots of protein and fiber, and may help prevent heart disease as well as lower blood pressure and boost bone health.

Whatever the case, Pedro claims that my Instant Pot moros y cristianos recipe tastes like the real deal. And I take that as quite the compliment, coming from a man who lived on Cuban food for his first 22 years of life!

When black beans and rice are cooked together, Cubans call them ‘congri’ or ‘moros y cristianos.’

Soak the black beans in 6 cups of water for about six hours OR place them in a bowl, pour six cups of boiling water over them, place a lid on the bowl, and let them set for an hour. Drain the beans before using them in the recipe.

After the beans are soft turn the Instant Pot to [Sauté] and allow it to heat while you chop the onions, garlic, and jalapeño. Add the olive oil and then the vegetables and sauté until the onions look limp.

Add the seasonings and stir well.

Add the 2 cups of water, the drained, pre-soaked black beans, and the brown rice.

Lock the lid and select [Pressure Cook]. Use the + and – buttons to adjust the cooking time to 30 minutes.

When the machine cycle ends, allow it to change to the [Keep Warm] cycle for 10 minutes before opening the vent.

Remove the bay leaves, add the salt (if needed), fluff, and serve.

This dish has enough protein to serve as the main course. Or, you could use it in whole-wheat tortillas for a healthy burrito.