Outstanding Audible Recordings You Must Listen to

HomeOutstanding Audible Recordings You Must Listen to 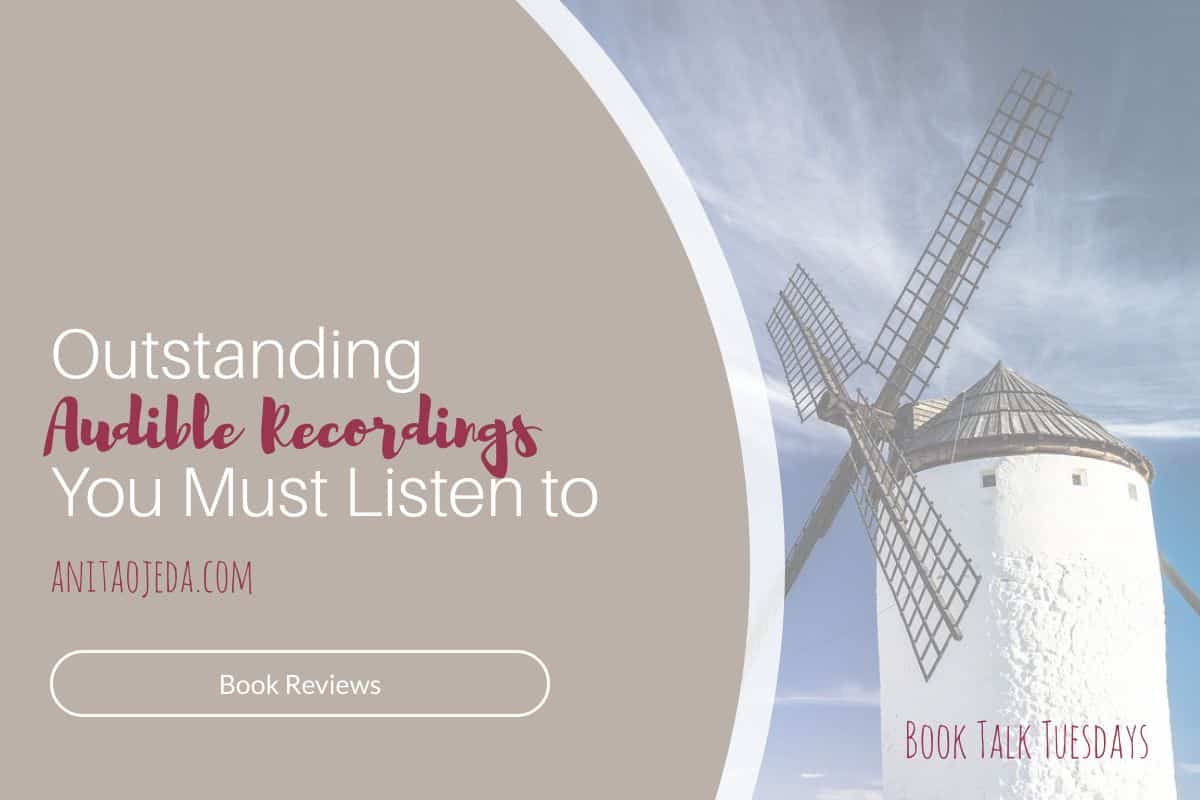 Looking for something to listen to during this time of social distancing? Check out these Audible recordings that I loved. Fifty-four hours of listening enjoyment. That should get you through at least a week of shelter in place!

by Miguel de Cervantes, translated to English by Edith Grossman, Ecco, 2003, 979 pages or about 40 hours on audiobook

“Widely regarded as one of the funniest and most tragic books ever written, Don Quixote chronicles the adventures of the self-created knight-errant Don Quixote of La Mancha and his faithful squire, Sancho Panza, as they travel through sixteenth-century Spain. You haven’t experienced Don Quixote in English until you’ve read this masterful translation.

This P.S. edition features an extra 16 pages of insights into the book, including author interviews, recommended reading, and more”~ from Amazon

Why I Loved This Audible Recording

Don Quixote, one of those books we all know a little bit about but have never read, has always seemed inaccessible to me. Even though I speak and read Spanish fluently. The sheer number of pages has deterred me, too. Audible to the rescue.

Recorded Books, the publisher, picked a genius narrator for this project. George Guidall’s knowledge of Spanish kept the Spanish words authentic-sounding. As a Spanish speaker, nothing irks me more than hearing the language butchered. The voices he creates for each character keeps the plot moving along and entertaining.

I didn’t expect a book written in the 1600s to have anything to say about feminism. Lucinda’s impassioned speech against those who criticize her for not loving a man strikes me as decidedly feminist–or personist.

You could slog through a thousand pages of Don Quixote on your own, or you could just listen to the audiobook. Some books have so much more meaning when read aloud by a skillful actor. The downside? You can’t highlight an audiobook.

A Woman of No Importance

In 1942, the Gestapo sent out an urgent transmission: “She is the most dangerous of all Allied spies. We must find and destroy her.”

The target in their sights was Virginia Hall, a Baltimore socialite who talked her way into Special Operations Executive, the spy organization dubbed Winston Churchill’s “Ministry of Ungentlemanly Warfare.” She became the first Allied woman deployed behind enemy lines and – despite her prosthetic leg – helped to light the flame of the French Resistance, revolutionizing secret warfare as we know it.

Virginia established vast spy networks throughout France, called weapons and explosives down from the skies, and became a linchpin for the Resistance. Even as her face covered wanted posters and a bounty was placed on her head, Virginia refused order after order to evacuate. She finally escaped through a death-defying hike over the Pyrenees into Spain, her cover blown. But she plunged back in, adamant that she had more lives to save, and led a victorious guerilla campaign, liberating swathes of France from the Nazis after D-Day.

Based on new and extensive research, Sonia Purnell has for the first time uncovered the full secret life of Virginia Hall – an astounding and inspiring story of heroism, spycraft, resistance, and personal triumph over shocking adversity. A Woman of No Importance is the breathtaking story of how one woman’s fierce persistence helped win the war. ~Amazon

Why I Loved This Audible Recording

This story will grip you from the beginning. That we had to wait so many years to know Hall’s story makes me sad. Her heroic acts deserve celebration in both the United States and France. Some 75 years after Hall’s heroic deeds both before and after D-Day, the CIA named a training center after her. It seems a small gesture for a national hero.

Girls looking for role models should know about Virginia Hall–a woman far ahead of her time who valued truth and freedom over comfort and societal expectations.

The narrator of this recording has a delightful British accent and is easy to listen to.