Terrified of the Unknown? Read This!

HomeTerrified of the Unknown? Read This! 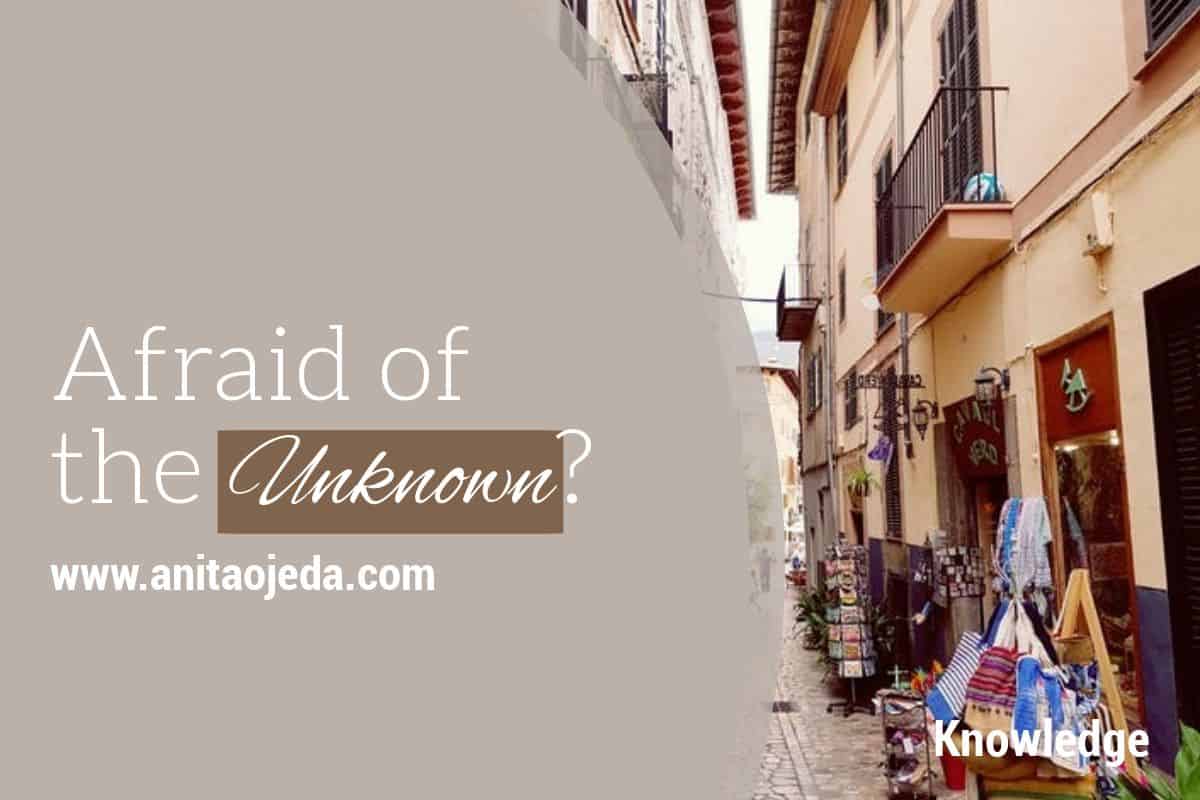 The unknown terrifies us more than we let on. Think about it. First days frighten us because we have no idea who we’ll meet, what they’ll think of us, how we should act, where we’ll sit for lunch, and a host of other unknowns. But we don’t have to let our terror keep us closed up in our comfort zone. In fact, we shouldn’t!

The unknown loomed large on my horizon. I had nightmares the night before I caught a plane from Seattle, WA to London, England. My plan (suggested by a friend) involved a one-way ticket to England and purchasing a plane ticket to Valencia, Spain. From Valencia, I would take a taxi to Sagunto, the location of Colegio Adventista de Sagunto—my school for the next ten months.

At eighteen, I had the world in my pocket, and wouldn’t admit my terror to anyone. I waved a cheery goodbye to my mom at the gate (back in the day, a family could walk you to the gate, not just the security line), and found my seat on a jumbo jet that seemed wider than my house.

After eight hours of flight, I arrived in London feeling rumpled and out of place. My hot pink sweats and sweatshirt that seemed like a good idea at the time felt out of place in a cosmopolitan airport.

To make matters worse, I could only understand about a fourth of what people said, and I hadn’t even arrived in Spain yet. I left the terminal I landed in, and found my way to the Iberia terminal to purchase a ticket. Of course, I had no idea that I needed to go through customs with my luggage—I thought it would magically appear at the other terminal.

By the time I finally reached Spain, I felt even more rumpled, sleep-deprived, and terrified. Especially when the taxi driver in Valencia left me in the car by myself for 20 minutes while he went to find someone who spoke English. The driver needed to know if the crazy girl in hot pink really wanted a ride to a town 30 km away.

When I arrived at the school and the dean showed me to my dorm room, I lay down on the bare mattress and burst into tears. When I went to the bathroom to find some tissue, I discovered that none of the stalls had toilet paper. It took an hour to figure out that each student got two rolls of tissue every month. BYOTP.

Two weeks later I could laugh at my journey into the unknown. The terrified feelings had dissipated, and I could say more than, “Where’s the bathroom.” Sure, I made plenty of embarrassing mistakes (telling a group of cute guys I was pregnant, for example), but I knew I belonged. That feeling of belonging helped ease the terror of the unknown.

My first immersion into a different culture taught me many things. Most of all, it taught me the necessity of more research and not relying solely on the advice of friends. Buying a ticket at the airport ended up costing me a lot more.

The older I get, the more I understand how often we rely on the advice of friends and fail to do our own research. Especially in today’s social media-driven society. We read rants, memes, and snippets of articles and make decisions about politicians, policies, and people within seconds.

We judge without knowing all the facts. I can’t tell you how many times I’ve heard people complain about illegal immigrants wasting all the taxpayers’ money because they get welfare checks each month. Not true. I’ve heard rant upon rant about _____ (you name the minority) coming to the US so they can live off welfare. Not true.

When we listen to rants and internalize the negative narrative, we easily become terrified of the unknown. Without the facts, we become dupes. Even Christians.

If I would have known then what I know now my trip to Spain would have stressed me less. Knowledge is power, and it keeps us from falling prey to social hysteria.

Now, when faced with an unknown (new job, travel in a new country, going to an unknown city for a conference, seeing a shocking ‘news’ story about a politician), I follow these steps.

1. Arm yourself with facts—preferably from multiple sources with differing viewpoints.

2. Don’t rely on social media as your sole source.

3. Think and research before you react (especially on social media).

4. Learn as much as possible. For example, before I started working at a school for Native Americans, I read multiple books, including books by Native authors, in order to understand my students better.

5. Smile a lot, and apologize readily.

6. Have a learner’s mindset. If you enter the unknown with a goal of learning, you will find your life enriched beyond measure.

As Christians, we have a duty to speak up for those who have no voice, to lift up the marginalized, and bring comfort to those in need. We can’t do that by sitting on our sofas and clicking and sharing sensational social media posts.

We have to roll up our sleeves, inform ourselves, and face the unknown with grace and humility—just like Jesus did.

We have to roll up our sleeves, inform ourselves, and face the unknown with grace and humility—just like Jesus did. #fmfparty #unknown Click To Tweet
FacebookTweetPin