The Leap Might Look Scary, But You Can Make It!

HomeThe Leap Might Look Scary, But You Can Make It! 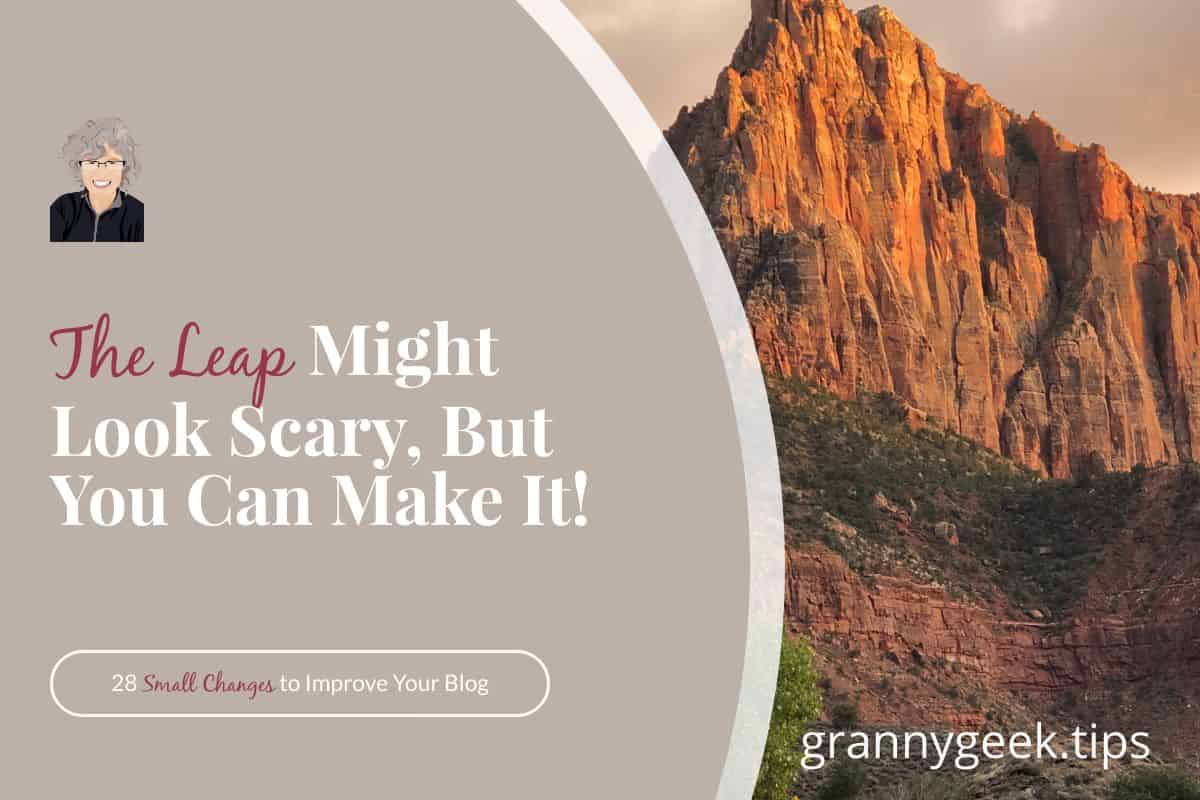 The Leap Around a Blind Corner

“You can do it!” I called encouragement to my student as he stood at the top of the cliff.

“I can’t!” he cried out, his voice bordering on hysteria.

“Come one, you can do it!” students who had successfully made the descent called back up to him. “We did it, so can you!”

“But what about the leap around the corner?” he called back.

“It’s not that bad,” a voice from below assured him. “Just a little hop to the right. It will seem natural.”

Finally, inch by inch, the student lowered himself down and around the corner out of sight. Those of us waiting our turn held our breath as we head him squeak out a yelp, followed by a grunt.

Our guide turned and grinned at us. “He made the leap!”

When we finally heard the student’s shaky voice call up, “Belay off!” we all breathed easier.

He had conquered his fears. I hoped he’d still talk to me at the end of the day. After all, I had encouraged him to sign up for canyoneering.

I have a crazy habit of doing hard things and dragging students along with me. They always told me afterward how much fun they had had. Until now.

My student had shed a few tears throughout the day-long excursion down rock faces, around blind corners, and through narrow slots in the side of a cliff. Other than a cultural fear of snakes, my students seldom express fear.

Maybe because they had become inured to change in their short lives. Many never know when they’ll eat their next meal, or which relative they’ll move in with next. Some don’t really have homes or addresses, or any of the things most of us take for granted.

I have no fear of heights, hard tasks, or marathons. Change scares me lifeless. Especially after our comfortable life morphed into a minute-by-minute fight against death when my husband had cancer. I discovered the darker side of change.

Change kicks us in our comfort zones and laughs in our faces. Sometimes it has stinky breath.

These days, change scares me. I have a visceral response to sudden changes I think will affect my comfort. But I’ve learned to take the leap anyway. I learned it from a student.

The Benefits of Taking the Leap

As we hiked back to the vans at the end of our canyoneering experience, my student surprised me when he called out, “Hey, Mrs. Ojeda!”

I waited for him to catch up with me. “What’s up?” I asked, half-fearful that he would complain.

“When can we do this again?”

“You want to lower yourself over a cliff with a rope and a harness again?” I joked.

“Yeah! It was so much fun! Did you see me make the last descent?”

“I did,” I said. “You had so much more confidence than on your first descent.”

“Yeah,” he said, “once I made that jump around the corner, I realized I was safe and I could do scary things.”

I gave him a high-five, and he ran up to discuss his adventures with a friend from a different group.

If he could face his fears and take a leap around a corner and rappel through a crack in a cliff, certainly I could face my fears of change and learn to embrace the experience. I could reframe change (which I dislike) as an adventure about to happen (which I like) and start taking the leap without all the sour attitude.

You CAN make important changes, too. Whether you need to make them in your life, or in your blog, just reframe things as an adventure, and take the leap.