The Most Powerful Way to Overcome Limiting Beliefs 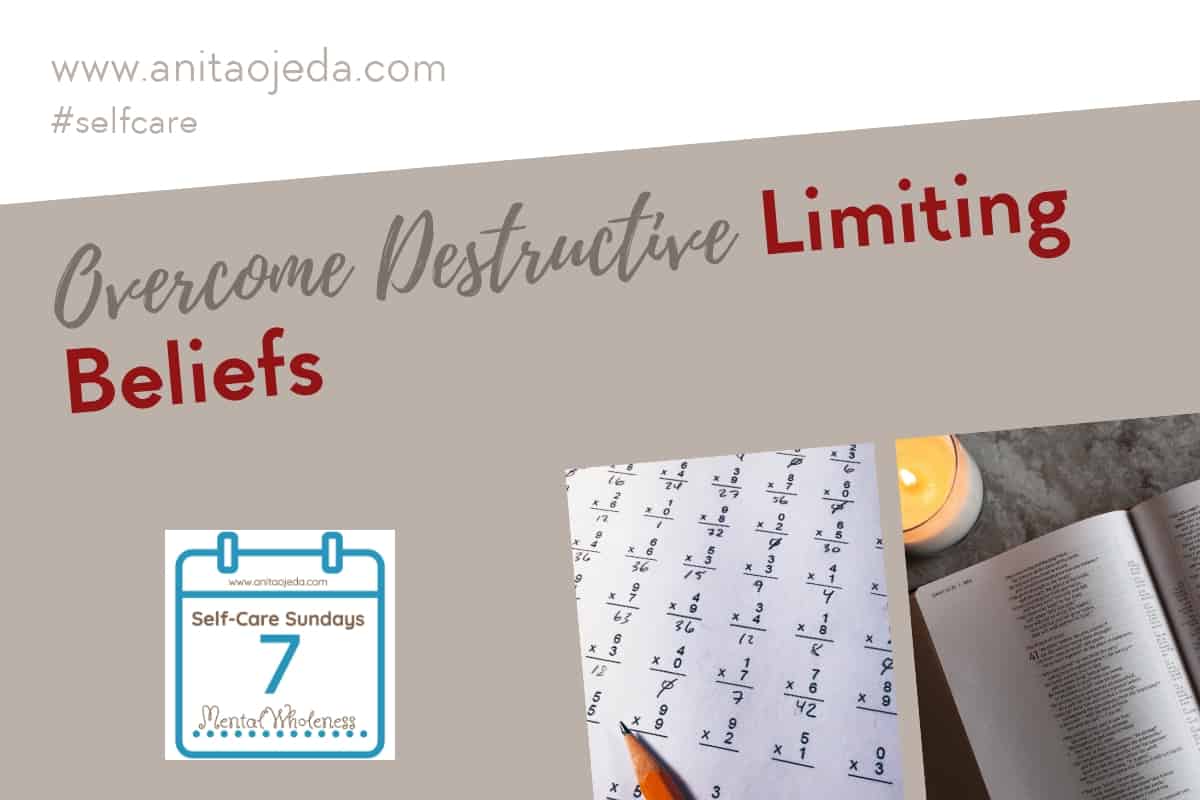 Spring has arrived in the northern hemisphere, and along with it signs of rebirth and renewal. For Christians, the weeks leading up to the celebration of Easter act as a lens to focus on the death and resurrection of Christ. Death and rebirth. For the next four weeks we’ll look at how this time of rebirth can help us renew our commitment to self-care—to stay on course with MAPS.

A limiting belief is a thought you think is true that limits your development in a certain area. For example, for years I believed that I wasn’t good at math. It all started with a high school math teacher that made me feel inadequate in geometry class. I had a strange elementary school history, and arrived at high school with gaps in my basic math knowledge.

A math teacher that exuded impatience with my lack of basic knowledge didn’t help the situation. He reminded me of photos I’d seen of Abraham Lincoln (minus the stovepipe hat), and his physical height, solemn demeanor, and impatience created a belief in me that I couldn’t do math.

I carried that belief deep inside me, and it prevented me from taking any more math classes in high school. It also helped me score in the 13th percentile in math on my ACT test. I had to drop out of two college math classes before I finally found one I could pass.

Three years after I finished college, I found out that I had to take a basic skills test in order to keep my teaching certificate. The test consisted of three topics—math (including algebra), reading comprehension, and writing. I had two choices—I could give in to my belief that I couldn’t do math, or I could find a math textbook and try to figure it out.

Because I really wanted to continue teaching, I decided to overcome my limiting belief and study math on my own. I spent the summer reading through my younger sister’s college algebra textbook. Each time I answered a question correctly, I’d give myself an internal high-five.

By the end of the summer I had only made it halfway through the textbook, but I felt confident. After all, I knew a whole lot more than I had when I started. I aced the test (including the math portion).

My experience with the limiting belief that I couldn’t understand math illustrates a common theme. Children often pick up limiting beliefs from parents, teachers, coaches, mentors, family members, and other significant adults in their lives.

Children can acquire limiting beliefs by what people say as much as they can by what people don’t say. #limitingbeliefs #cognitivedissonance #selfcare Click To Tweet

Why do limiting beliefs from childhood have so much power in our lives as adults?

According to an online article in Simply Psychology:

Bottom line—when our beliefs don’t line up with our attitudes or behaviors, something has to give. We will change one area in order to make it line up with the other. This can work both for us, or against us.

As children, someone else’s words or attitudes can heavily influence us and cause dissonance. My math teacher’s failure to encourage me and his subtle impatience with me caused dissonance in my heretofore positive belief that I could understand math. Because an authority figure caused the dissonance, I adjusted my behavior to live up to his expectations.

I moaned and groaned and whined about geometry. Class took on a depressing routine of effort and failure. I passed the class (barely), but failed to learn anything useful.

Fast-forward to my experience after college where I proved to myself that I could learn math. Did I become a sudden math whiz? No. My limiting beliefs lingered with me until another 25 years had passed. I found myself in charge of the 7th-12th grade students who needed help with math basics (1st-4th grade math).

As I helped my students figure out input and output charts, word problems, and fractions, I gained confidence in my math abilities. By the end of the year, my students and I had made it into 6th grade math! Sometimes students in 7th or 8th grade math will even come to me for help (I still teach the basic math class).

Because I had to teach math—a behavior that I thought I was bad at—I had to change my limiting belief or give up my job. I value my job more than I value the belief caused by cognitive dissonance so many years ago.

So, I changed my attitude in order to create a new harmony. In fact, maybe I am the best teacher for the job because I understood what it feels like to have an impatient teacher who doesn’t tell students that they CAN figure math out.

Of course, I have struggled with more limiting beliefs than my relationship with math. Beliefs that tell me I’m disorganized, messy, impatient, not worthy of success, and short-tempered. Those beliefs (especially the last three) hit closer to who I am at my core, and thus have a bigger impact on my life.

In order to work through those limiting beliefs, I had to change the consonance that I had lived with for years.

The Most Powerful Way to Overcome Limiting Beliefs

The Bible tells us in Titus 3:5 that:

he [God] saved us, not because of righteous things we had done, but because of his mercy. He saved us through the washing of rebirth and renewal by the Holy Spirit,

God offers an antidote to every limiting belief that we hold as gospel truth.

A New Kind of Dissonance

When we repeat and internalize the promises of God, they create cognitive dissonance within us. The God of the universe has an antidote for each of the beliefs that the devil has whispered in our ears.

We can use the promises of God to create dissonance in our lives and old beliefs. By repeating his promises, we will start to believe them because we want consonance in our lives. If the God of the universe says that I am valuable, I must be valuable.

I don’t know all of the limiting beliefs that you hold, but I can guarantee you that somewhere in the Bible you can find a promise that tells a truer story.

Know this: God wants the best for you. He stands by, waiting for you to ask him to help you overcome the beliefs that have held you back. When you have dissonance in your life, seek the promises of God to find out how HE wants you to align your beliefs and actions.

When you do this, you’ll discover a rebirth and renewal you never thought possible.

Join us for Inspire Me Monday!