This Vegetarian Pozole Recipe will Serve an Entire Fiesta 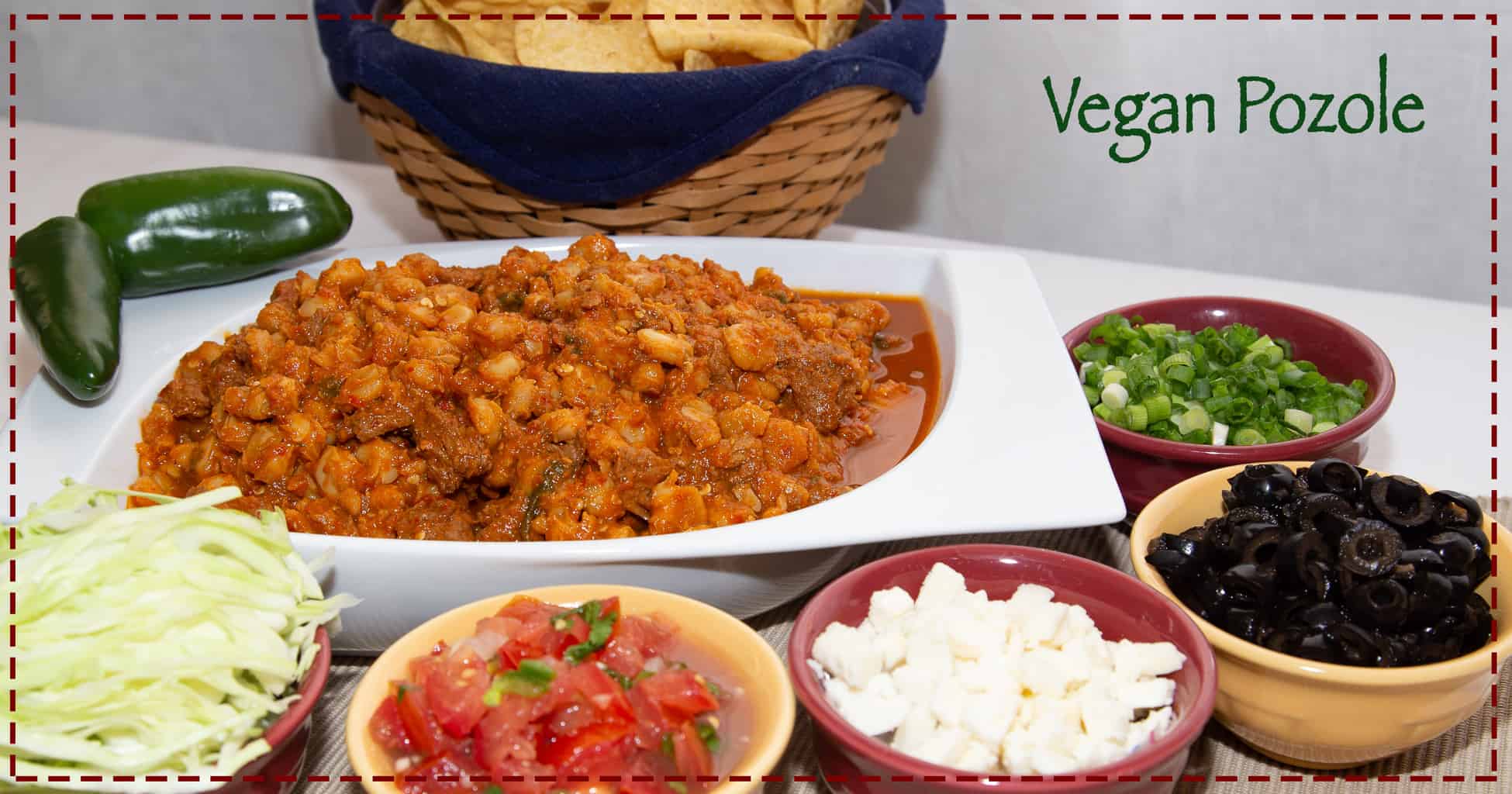 You can serve this vegetarian pozole to vegans, vegetarians, gluten-free friends, and meatatarians alike. Everyone will love it. The recipe will feed a small crowd, too!

First of all, let’s get the spelling correct. According to the Merriam-Webster dictionary, the word origin is the Nahuatle word for ‘boil,’ and it’s written ‘pozolli’ with a root word of ‘pozon.’ I’m not an etymologist, but I did major in Spanish in college and I may be able to shed light on why people see the word for the delicious hominy soup spelled both ways.

It all goes back to making spelling easier, regional differences in dialects (Spain had many), and who signed up to explore the New World. Let’s see if I can explain it so a non-linguist can understand. If you happen to be a linguist, I apologize for any mistakes I might make.

In Castilian Spanish (that’s what Spaniards call their dialect, sort of like British English and American English), the letters c and z are pronounced according to which vowel follows. For example, ‘ca’ and ‘co’ are hard sounds (like ‘ka’ and ‘co’ in English). When ‘i’ or ‘e’ follows a ‘c’, the ‘c’ takes on a soft sound, kind of like ‘thee’ and ‘they.’

Now for the history lesson. As the Castilian kings and queens conquered smaller countries and ethnic groups, they inherited the languages of those groups as well. Castilian, of course, acted as the gold standard, and since the ruling class spoke it, everyone else had to learn it. Franco tried to eradicate the other three dialects during his reign, but they live on today.

The majority of the conquistadores came from the southern part of Spain—and spoke the Andalusian variety of Spanish which made no distinction between the pronunciation of the letters ‘s’ and ‘z.’

That’s why I can spell better in Spanish than my husband can. More or less. He grew up speaking Spanish (he was born in Cuba and lived mostly in Jamaica, Costa Rica, and Puerto Rico as a child).

I learned Castilian Spanish over in Spain as an adult. When I lived in Spain, we made fun of the student from Honduras because he said, ‘la luz’ and pronounced it ‘la loose.’ The Castilian speakers said it ‘la looth.’ When we first met, Pedro claimed I had a lisp.

Back to the word ‘pozole.’ Based on the fact that the original Nahautl word is spelled with a ‘z,’ I’d lean towards ‘pozole’ being the correct spelling of the word. But the use of the ‘s’ is understandable, too (it just bothers me to see it spelled that way, but I have grammar issues).

Wait!? What IS Pozole?

Regardless of the mystery surrounding the dual spellings, pozole and posole are the same thing. And I learned how to make vegetarian pozole from a chef in Los Álamos, Mexico about 18 years ago. He prepared vegetarian meals for the mission trip I participated in—I had no idea that Mexico had a thriving fake meat industry. In fact, the faux meat in Mexico looks so much like real meat that I insisted that Pedro check it out before I ate it to make sure it wasn’t the real thing.

I added a few items over the years (like the carrot, because when you have a BlendTec, why not?), but the basic recipe remains the same. You can get creative with what you put on top, though.

When company comes over and I serve vegetarian pozole, I explain to the uninitiated that it’s like a wet Mexican haystack. Since our students love haystacks, it’s a concept they grasp quickly (although many of them look askance at me at first).

My biggest dilemma when serving pozole is whether I should set the table with forks or spoons. I can never decide which works best (I usually start with a fork and end with a spoon). Although everyone probably eats their pozole differently, we start with some tortilla chips. If you have gluten-free guests, make sure you purchase gluten-free chips for them.

Next, we add shredded cabbage and queso fresco (your vegan guests will be able to skip this step because everyone builds their own), and then pour a ladle of pozole on top. After that we add things like fresh salsa, olives, guacamole, and chopped green onions.

You say posole, I say pozole. Either way, this vegetarian pozole tastes great. If you need to feed a giant crowd, just double the recipe. It’s the perfect make-ahead meal.

Heat a very large skillet and add the olive oil. Chop the onion, jalapeños, and garlic into BIG chunks (they’ll get whizzed in the blender). Add them to the oil and sauté for ten minutes, stirring occasionally.

While the veggies sauté, boil two cups of water and pour it over the dried chili pods to soften them up.

Add the water and chilis, sauteed vegetables, the chopped carrot, spices, nutritional yeast, and salt to a large blender jar (you may have to do this in two batches, depending on your blender) and whiz at high speed until no chunks remain (about 2-5 minutes).

Pour the liquid mixture into a large crock pot or kettle, and add the soy curls (or other dried fake meat), the hominy, and six cups of water. If you’re using a crock pot, you can put the lid on, set it on low, and walk away for the day. If you’re cooking the pozole on the stove top, you’ll need to come back occasionally and stir it (and maybe add more water). Simmer on low for several hours.

The longer the soy meat soaks up the sauce, the better it will taste. I sometimes cook the pozole a day or two ahead of time and just reheat it when I need it.

I usually serve this buffet style so everyone can make it the way that sounds best to them.

The perfect recipe for group of vegans, vegetarians, gluten-free folks, and meat eaters (I call that a mixed crowd)--vegan pozole (you can choose your own toppings). #meatlessmonday #recipe #vegan Click To Tweet

I’m including links to different varieties of soy meat products. I’ve even found the good Mexican kind in grocery stores near the border. Remember that 3 lbs of soy meat will yield 68 servings (1/4 cup of hydrated meat).