What Does “Be Angry and Sin Not” Really Mean?

HomeWhat Does “Be Angry and Sin Not” Really Mean? 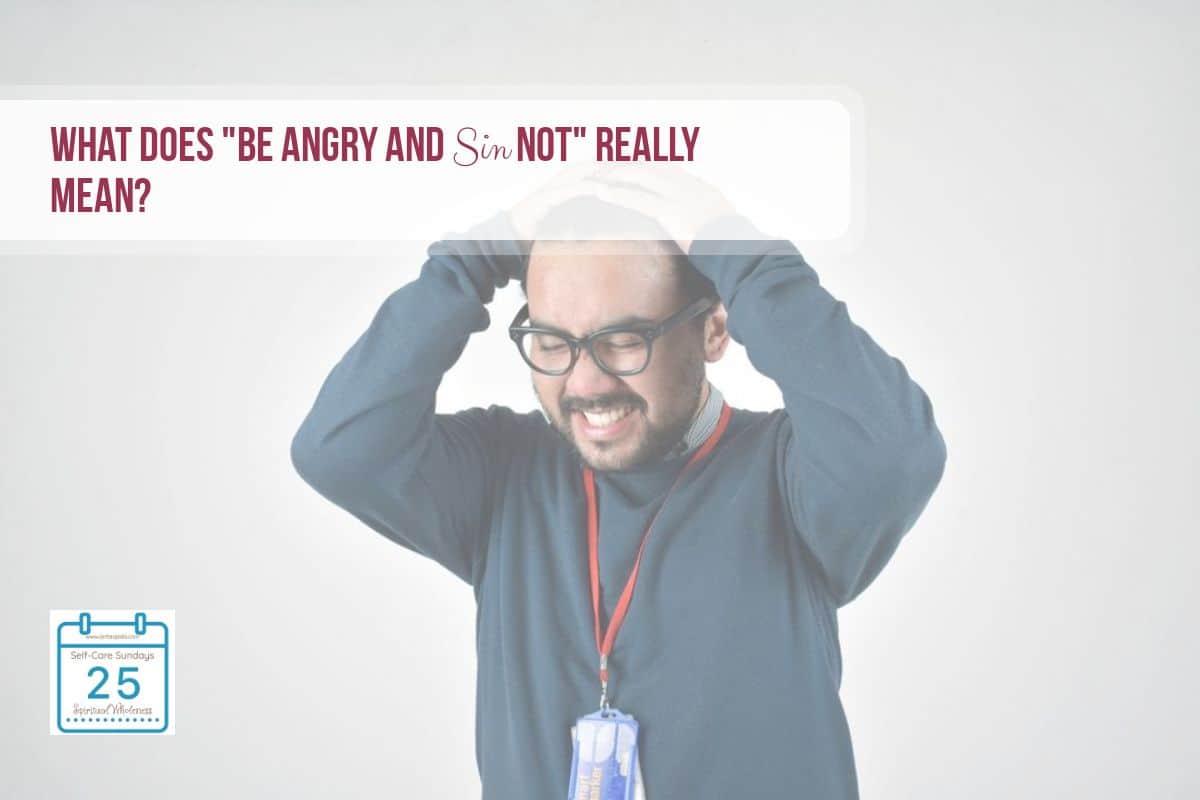 Ever heard someone say, ‘Be angry and sin not?’ Or what about ‘Don’t go to bed angry?’ I used to think these were mandates for me as a Christian to hold my temper and forgive my husband before we went to sleep at night. Not anymore!

“Most teachers, unless the board has plans to fire you or let you go, will get moved to Level-Three employment status after two or three years,” the private school law professor explained.

I sat in class, furiously scribbling notes, doodles, and spirals. After taking a deep breath, I raised my hand, “You’re saying that school boards have no obligation to move a teacher to Level-Three status?”

“Well, it’s a tricky question. If a school board moves a teacher to Level-Three status, that makes it more difficult to terminate them. But most teachers don’t want to keep working at a school where they don’t attain that more secure level of status.

I silently fumed and fought back tears at the same time. I had worked for nine years, NINE YEARS, and never gotten moved to Level Three. Sure, that fact bothered me in a low-level way. But to hear a school law professor baldly state that it probably meant the school board didn’t want to keep me? Ouch.

While class droned on my head spun around and around, thinking of all the possible reasons why the board hadn’t afforded me the courtesy of Level-Three status. Maybe they just kept me employed because we paid a hefty tuition bill each month for our daughters to attend. Perhaps they weren’t planning on renewing my contract next year. Maybe someone on the board hated me. What had I ever done to deserve this treatment?

Class ended and I stumbled towards the exit and rushed to the sterile dorm room where I had camped for four weeks of summer classes. I opened the door and burst into sobs. On one level, I knew I had fallen short many times as a teacher. But I had never realized how little my employers valued me.

My anger simmered and sizzled. It snapped and crackled. I wrote a letter to the professor asking for advice. My anger felt justified and righteous.  The school had wronged me.

In retrospect, knowing what I know now about primary and secondary emotions, my anger masked my hurt and fear. Hurt that despite trying to improve each year as an employee, my efforts had done nothing for my employment status. Fear that the board might just not renew my contract the following May.

In the middle of my first year at this school, Pedro got cancer. By the start of the second year, Pedro’s cancer had crossed the blood-brain barrier and his life hung in the balance. I did my best under the circumstances, but I knew I hadn’t given my job my all.

The third year went much better (or so I thought), but by my fourth year we needed an additional source of income to pay off cancer debt. Pedro started substitute teaching for the local school district, but his earnings didn’t make a dent in the cancer debt. I started moonlighting at a bookstore in the evenings, on the weekends, and during the summer.

For some reason, no matter how hard I tried to make changes based on my evaluations at the end of each school year, nothing I did seemed to make a dent in my employment status. I resolved to just live with it and keep on improving.

But then the school law professor had revealed the real purpose of a Level-Two status. I felt devastated. For weeks after this revelation, I grappled with anger. And sadness. I didn’t acknowledge the sadness, though, because Christians are supposed to be happy.

Each time I thought of the situation, tears welled up in my eyes. I’d never felt this weepy before, even in the midst of Pedro’s fight for his life.

My anger got between me and God. I felt betrayed and abandoned—by God and the school board. My funk lasted the rest of the summer. I felt guilty for feeling angry at God.

At the same time, the mysterious chest pains I’d had every eight months or so started to hit me with increasing frequency.

I could never pinpoint what brought the pain on, and doctors could never figure out what caused it. The pain presented differently each time. Sometimes I couldn’t take a deep breath without excruciating pain (they called it costochondritis). Other times my back and chest felt so tender and swollen that I couldn’t lie down (maybe I had Fibromyalgia?).

I alternated between ignoring the pain and medicating it with over-the-counter pain killers or prescription muscle relaxers. When those strategies failed, I went to see an acupuncturist, a chiropractor, and a cardiologist. I endured excruciating pain for weeks, sometimes months at a time.

Walking at anything faster than a snail’s pace hurt. I had to give up running, mountain biking, and hiking regularly. This went on for almost two years. Eventually, Pedro found his dream job in Arizona, and we moved away. I’ve only had two pain relapses in the last eight years.

Be Angry and Sin Not

In retrospect, pent-up emotions proceeded all of my episodes. In the early years after Pedro’s recovery, I suffered from mild depression and anger at all that we’d lost.

Later on, any bottled-up emotion could trigger an episode. Someone at work slighted me, and two days later I could scarcely crawl out of bed. A private plane crash took the lives of three generations of a family I knew of, and four days after the tragedy I couldn’t take a deep breath without pain.

Pedro and I had an emotional disagreement about some minor issue, and a week later I would once again be reduced to a shuffling shadow of myself.

Five years have passed since my last episode, and the more I learn about self-care, the more I realize that perhaps I misunderstood Paul when he counsels Christians on how to handle anger. I thought his advice to ‘be angry and sin not’ meant that Christians should not get angry. And the second part of Ephesians 4:26 meant that we should immediately forgive anyone or anything who angered us.

In other words, I thought Christians should be content to act as happy doormats.

But even God, in whose image we were created, gets angry (Exodus 4:14, Exodus 15:7, Exodus 32:10-12, just to name a few). Lest you think God unfair in his angry outbursts against the Israelites, read Leviticus 26—God doesn’t threaten and repeat. He made a covenant with the Israelites, and only unleashed his anger when they broke the covenant. God always welcomed them back with mercy and grace.

Another Look at Ephesians 4:26

I recently took another look at Ephesians 4:26, this time going to two different versions. The Amplified Bible and The Message made me rethink my previously held beliefs about the adage to be angry and sin not.

26 Be angry [at sin—at immorality, at injustice, at ungodly behavior], yet do not sin; do not let your anger [cause you shame, nor allow it to] last until the sun goes down.

The Amplified Bible makes it clear that we should direct our anger towards things, not people. In addition, we should control our anger so that it does not shame us, nor should we allow it to last indefinitely.

“’Who’s in charge—the thinker or the thought?’ Are we managing our own lives according to our own values and what is important to us, or are we simply being carried along by the tide?”

Eugene H. Peterson, in The Message translation has a slightly different take on Paul’s counsel:

“Go ahead and be angry. You do well to be angry—but don’t use your anger as fuel for revenge. And don’t stay angry. Don’t go to bed angry. Don’t give the Devil that kind of foothold in your life.”

Christians can experience anger—and what we do with that emotion matters. If we process it by observing it with kindness and curiosity, we have a better chance of discerning the underlying emotion and deciding what to do with it. We allow ourselves a pause between the stimulus and the response in which we choose to do the right thing.

Don’t stuff or bottle emotions. Rather, acknowledge your humanity and give yourself time to choose the right course of action based on our values as a Christian.

Go Ahead, Get Angry

I don’t know where I came up with the idea that Christians shouldn’t get angry. That misinterpretation of scripture caused me actual physical harm for over twelve years. These days, I attempt to show up for my feelings—acknowledging them with compassion and curiosity. I often do this through journaling.

Bottling my anger (or sadness), or ruminating over it serves no positive purpose in my life. Instead, it gives the devil a foothold for further emotional (and physical) devastation. Forming new habits doesn’t come easy for me, but now I understand the toll of bankrupting my health by clinging to anger.

The next time someone waves ‘be angry and sin not’ in your face, share Ephesians 4:26 in the Amplified Bible or The Message.