Home Blog Self-care and Nurture What One Thing Would You Take With You?
Anita Ojeda 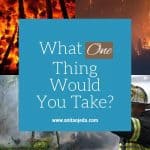 I have friends, classmates, and former coworkers who live in Paradise, CA—or the former Paradise, CA. Many of them worked at Feather River Hospital, and barely made it out with their lives. My Facebook feed filled with photos of melted cars, garage doors where houses used to stand, flames licking both sides of the road, and stories of miraculous escapes.

One of my friends helped deliver a baby during the evacuation. Her husband hitched a ride from the hospital with a Fish and Game warden and helped rescue patients from a nursing home. Miraculously, they had cell service off and on during the ordeal, and could call each other, pray with each other and for each other, as well as call family members.

Another friend helped evacuate the school where she worked—the school survived the fire, but her house didn’t. A crumpled garage door marks the spot where their beautifully landscaped house once stood.

A meowing cat awakened my co-worker’s father-in-law. A cat that heretofore had never uttered a sound. When the cat woke him up, he saw fire out the window and rushed around to the neighbors, frantically pounding on doors and windows alerting everyone to the danger. He and his wife (and the cat) made it out, but they lost everything else.

The sobering pictures and harrowing stories have made me think. What one thing would I grab if I had minutes to escape an inferno? My camera? My computer? My back-up drive? Irreplaceable family photos from the late 1800s?

What one thing would you take with you if you faced a forced evacuation? #disaster #hope Click To Tweet

What One Thing Would You Take with You?

In truth, the one thing that matters is not really a thing. Human lives matter. Doctors and nurses were evacuating the hospital in their own vehicles. A Fish and Game warden hauled nursing home residents in the back of a truck while my friend used fire extinguishers to battle the flames that came too close. Some people burned alive in their cars.

I saw a car ad over and over this summer. As the news report shows a meteor headed towards earth, a couple starts packing their vehicle. The vehicle has so much room, they keep packing as they track the meteor’s progress. The commercial disturbed me then, and in light of the fires in Paradise, it disturbs me even more today.

We never know when a natural disaster will strike. I know that I have a Savior who loves me, and I understand that the end game isn’t here—it’s in Heaven. But how many of my neighbors, students, friends, and acquaintances don’t know what I know.

I can’t claim that I’ve intentionally spent time spreading the good news about my Savior. Not once have I pounded on a neighbor’s door or proclaimed it to strangers. We all need saving, but in today’s social and political climate, door pounding and proclaiming aren’t PC.

But I feel a sense of urgency. So, I’ll proclaim it from my blog. I’ll take time to check in with others and see if they know the God of green hope. Hug your family and friends. Hold them close and pray powerful prayers over them. Life is short. When it’s all over, the one thing we have is our relationship with Jesus. That’s it.

“Oh! May the God of green hope fill you up with joy, fill you up with peace, so that your believing lives, filled with the life-giving energy of the Holy Spirit, will brim over with hope!” Romans 15:13 (MSG)