Who Would Jesus Vote For, and Why?

HomeWho Would Jesus Vote For, and Why? 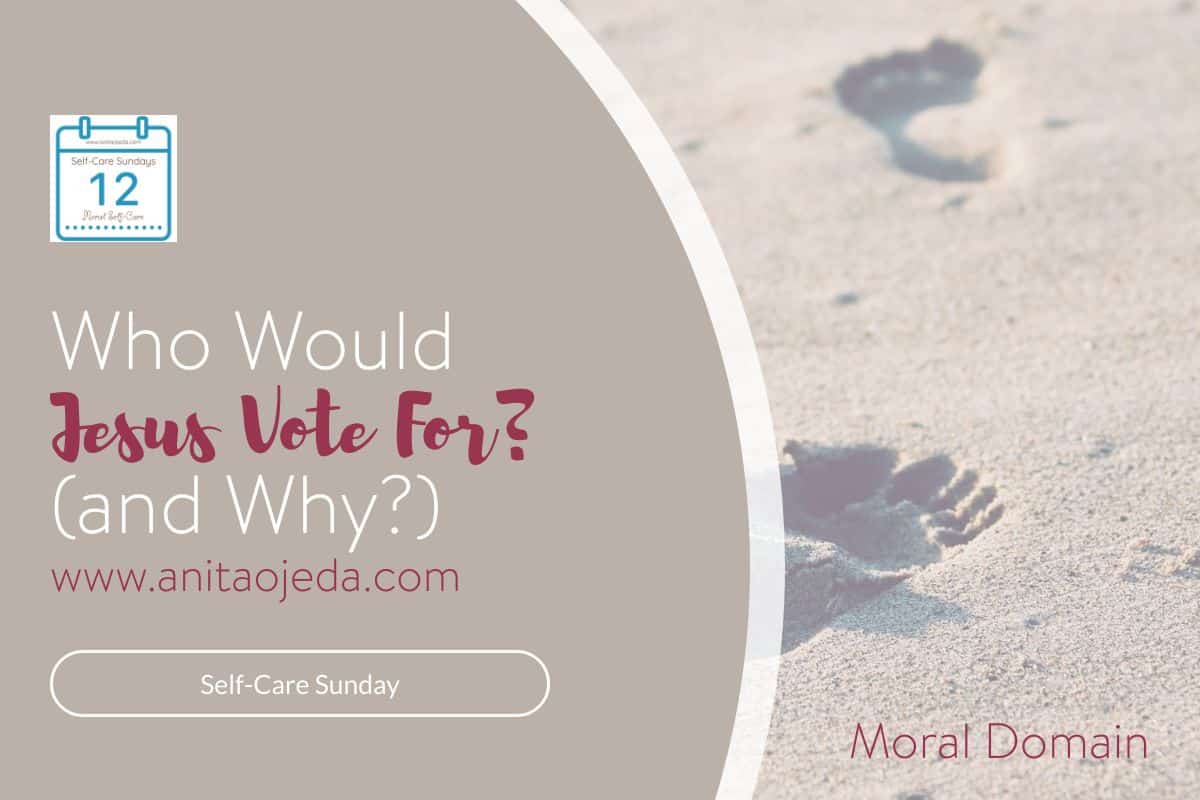 Have you ever wondered who Jesus would vote for in a political campaign? I confess it never really crossed my mind before. But events are making me think differently. WWJVF? is a question all Christions should ask themselves today.

Self-care means taking care of our moral compass. As the elections in the United States start heating up the airwaves and polarizing the population, maybe it’s time to remagnetize our moral compass. When we align ourselves with Jesus, we find it easier to wade through the rhetoric and continue moving in the right direction.

What’s the Difference Between a Bracelet and a Wristband?

“You need to take your bracelets off,” the teacher said. “You know the handbook forbids bracelets and other jewelry.”

“Bracelets?” the student asked in bewilderment.

I looked at the student’s wrist, wondering what in the world my co-worker at a conservative Christian high school had noticed that I had missed.

“Yeah. You have an orange one and a yellow one.”

The student tugged up his sleeve and pointed to the yellow one. “This is a LiveStrong wristband to show support for my mom who has cancer. And this one has WWJD imprinted on it to remind myself that I should ask for God’s wisdom before taking actions.”

“Oh.” My colleague looked unsure about the next step to take.

“I think our handbook prohibits bracelets, not rubber wristbands,” I said with a friendly smile. “We can check with the principal during faculty meeting this week, though.”

I turned to the student, “I’m so sorry to hear about your mom. How’s she doing?”

He filled me in on the details of his mom’s illness, and the other teacher excused himself.

I walked away thinking about the irony of a student at a Christian school getting chastised for wearing a rubber wristband that proclaimed ‘What Would Jesus Do?’ by an employee who claimed to follow Jesus.

Somehow, between the cross and now, the church has lost sight of the fact that Jesus was a radical. Don’t believe me? Think about how Jesus acted in relation to the society around him.

If Jesus Had a Vote, Who Would He Vote For?

Based on Jesus’ radical relationships, who do you think Jesus would vote for today? Jesus spent three years homeless and jobless. He understands the concept of relying on public assistance for his next meal and a place to sleep.

Jesus healed people—he understands diseases and the life-changing benefits of wholeness. Would he vote for policies and politicians that supported medical research and improved healthcare?

Jesus treated women as equals. Some scholars would claim that men in the early church purged the presence of women’s leadership from the record (even changing the name of Junia to Junius in Romans 16:7. In fact, look at the list of women in Romans 16 (you may need the Blue Letter Bible app to figure out which names belong to women).

Paul cites Tryphaena, Tryphosa, and Persis (all women) as having ‘worked hard in the Lord.’ Jesus (and Paul, despite his cryptic words in other letters with instructions for how women should behave) saw women as fellow workers in spreading the Gospel.

Jesus came alongside little children, sick people, and sinners. What current issues or policies would we embrace that reflect Jesus’ desire to come alongside and elevate the least of these in today’s society?

Would Jesus vote for legislation that protected the perpetrators and blamed the victims? #vote #decision2020 #WWJD #WWJVF Click To Tweet

What about politicians who claim to support the unborn, but deny justice to the born? Would Jesus vote for a politician who demeaned women publicly but promised to support legislation against abortion?

I don’t have answers, only questions through which I want to filter my decisions. In this month when we celebrate liberty, let us start thinking about politics through a different lens.

What Would Jesus Do?

As Christians we do each other a disservice when we evaluate our actions through the lens of WWJD and then apply our findings to every other Christian.

Charles Sheldon in his best-selling book In His Steps: What Would Jesus Do? has characters ask this question as they make decisions about ethical questions of the time (the book released in 1896).

For each person, the answer differs because the situations differ. When we try to apply broad rules and standards to everyone else, we miss the point.

Jesus came as a healer, a teacher, and a come-alongsider. He didn’t come to make sure students didn’t wear jewelry and everyone adhered to the Jewish standards of dress.

His kingdom didn’t (and shouldn’t) consist of prosperous people who legislated for laws that would further their personal gain and elevate their level of comfort.

Instead, Jesus clearly taught that believers needed to give up their relationships and comforts in order to follow him (Luke 9:23). What comforts (political promises) would you willingly give up to follow Jesus’ example of coming alongside the least of these in today’s society?

Come back next week for a free printable worksheet that will help you sort out the questions and find answers.